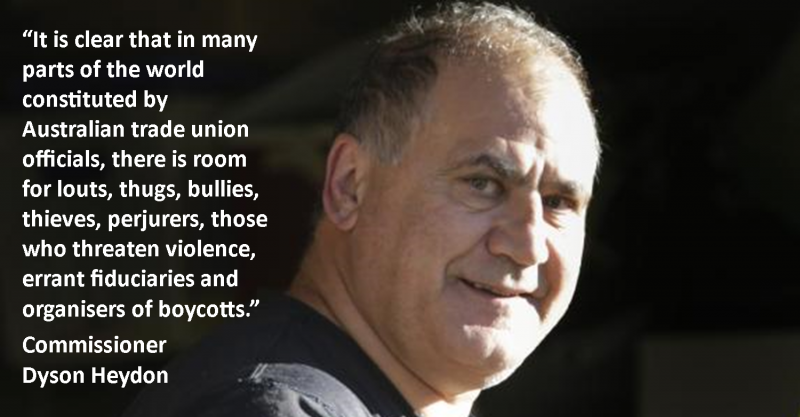 Time and time again, union officials have been exposed as putting their union’s interests and their own interests ahead of the interests of workers and their families.

As Commissioner Dyson Heydon says, “These aberrations cannot be regarded as isolated. They are not the work of a few rogue unions, or a few rogue officials. The misconduct exhibits great variety. It is widespread. It is deep-seated.”

In Victoria, union official turned Labor MP, Cesar Melhem, may now face criminal charges including receiving corrupt commissions and false accounting. In short, it’s alleged he took payments from bosses behind the backs of the workers he was supposed to be representing, and issued false documents to disguise those payments.

Senior figures in the union movement recognise that this sort of behaviour by trade union officials is unacceptable and must be cleaned up. Premier Andrews needs to do the same.

If Mr Andrews fails to throw Mr Melhem out of the Labor Party, it will just add to the stench of previous rorts and abuses already surrounding his government, such as the tapegate affair, the misuse of Parliamentary electorate allowances to pay for Labor election organisers, and condoning the thuggery and lawlessness of the CFMEU.