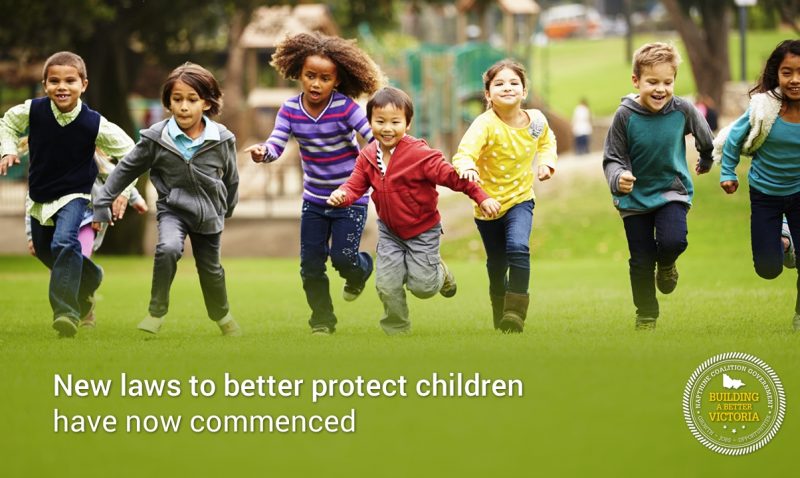 As of yesterday, new laws apply requiring ministers of religion in Victoria to hold a Working with Children Check, and from today it is an offence to fail to disclose information to police where a person knows or believes that a child has been sexually abused.

Attorney-General Robert Clark said the changes to Working with Children Check laws make clear that all ministers who have contact with children in their congregation as part of their work, or who visit or take part in church schools, kindergartens, Sunday schools, youth camps or any other church activities involving children, need to have a Working with Children Check.

“Ministers of religion, regardless of faith, have a special responsibility through their work that places them in positions of trust and authority,” Mr Clark said.

The new requirements for Working with Children Checks will apply to all ministers of religion unless their contact with children is only occasional and incidental. Until now, ministers of religion were not required to hold a Working with Children Check unless they had regular, direct contact with children that was unsupervised.

Mr Clark said strengthening of the requirement for ministers of religion to hold a Working with Children Check was a recommendation of Betrayal of Trust, the report of the bi-partisan Parliamentary Family and Community Development Committee inquiry into the handling of child abuse by religious and other organisations.

The legislation also includes clearer definitions and offence classifications, and greater powers to revoke a check where a person fails to provide required information.

Delivering on another recommendation of the Betrayal of Trust report, it is now an offence carrying a penalty of up to three years in jail for an adult to fail to provide relevant information to police if they have a reasonable belief that a child has been sexually abused, unless they have a reasonable excuse not to do so.

This law is in addition to current mandatory reporting to child protection authorities.

“The failure to disclose offence means that not only is there a moral obligation to protect children from abuse, there is now a clear legal obligation as well,” Mr Clark said.

“This new offence makes clear that if someone knows or believes that a child has been sexually abused, they cannot just keep quiet about it – unless there is a good reason why not, they have a duty to tell the police what they know so that the police can bring the offender to justice and prevent further abuse.”

Under the new law, adults who have information that leads them to form a reasonable belief that another adult has committed a sexual offence in Victoria against a child under the age of 16 years must disclose that information to Victoria Police, subject to some exemptions, including:

Additional information about the new laws is available from the Department of Justice web site at www.justice.vic.gov.au under “Safer Communities – Protecting Children and Families – Betrayal of Trust Implementation”.

Further reforms to hold perpetrators of sexual abuse to account have also come into effect recently, with new laws commencing on 22 October to remove time limits that previously prevented the prosecution of certain sexual offences against children committed prior to 1991.

These new laws are further steps in the Napthine Government’s implementation of the Government’s response to the recommendations of the Betrayal of Trust report. Other reforms that have been introduced or are being implemented include:

• new criminal offences for grooming and for failure to protect children within organisations;
• legislating for a ‘course of conduct’ charge to make it easier for repeated and systematic sexual offending to be prosecuted;
• minimum child safe standards for organisations that have direct and regular contact with children;
• allowing the Commission for Children and Young People to scrutinise organisations’ systems for keeping children safe;
• a new ‘reportable conduct’ scheme for organisations with a high level of responsibility for children, requiring them to centrally report all allegations of child abuse to the Commission for Children and Young People; and
• requiring all schools, both government and non-government, to implement a policy for responding to allegations of child abuse.