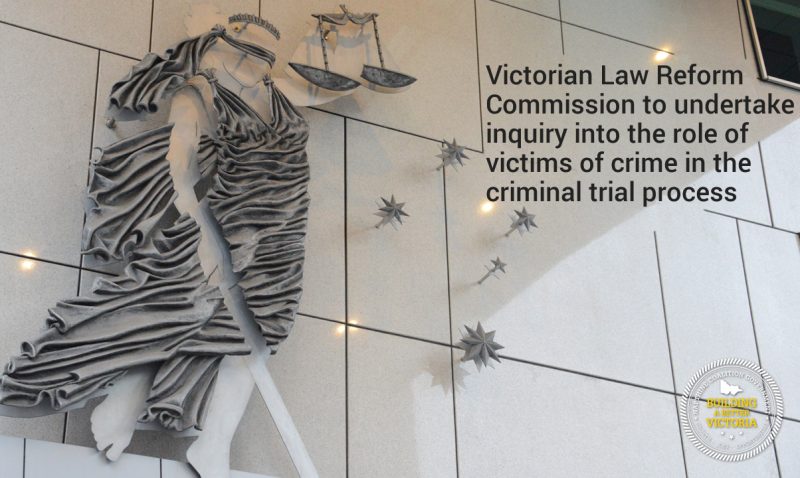 The Victorian Law Reform Commission (VLRC) is to undertake a detailed inquiry into the role of victims of crime in the criminal trial process.

Attorney General Robert Clark today released the terms of reference for the inquiry, which will examine all aspects of victims’ roles in relation to criminal trials.

“For centuries, the common law has regarded victims of crime as little more than witnesses in cases that are brought by the Crown against alleged offenders,” Mr Clark said.

“In 1994, then Attorney-General Jan Wade introduced legislation to give victims of crime for the first time in Victoria the right to make a victim impact statement to the court to be considered in sentencing the offender.

“This was the beginning of series of reforms that have given victims greater recognition and respect in various aspects of criminal justice system.

“Over the years since 1994, we have seen the establishment of a Victims’ Charter, a crimes compensation scheme and a Victims Support Agency.

“There has also been growing recognition by police, prosecutors and courts of the impacts that criminal trials have on victims and their families and the importance of keeping victims informed and being respectful of their needs and interests.

“However, there has been no fundamental examination of the roles that victims should be able to have in the various stages of the criminal trial process, ranging from decisions about prosecutions through to sentencing and the making of compensation orders.

“This root-and-branch review by the VLRC will provide an opportunity to examine all aspects of how the criminal trial system treats victims, and whether victims should have greater rights to be involved at various stages of the trial process.”

Mr Clark said that as part of its review, the VLRC had been asked to examine how Victoria compares with other jurisdictions around the world, particularly jurisdictions not based on the common law.

Mr Clark said this in-depth review by the VLRC would build on the range of measures previously taken by the Coalition Government to support victims of crime and ensure their rights are strengthened and respected, including:

• the appointment of former Police Association Secretary, Mr Greg Davies APM, as Victoria’s first Commissioner for Victims of Crime;
• establishing the Victims of Crime Consultative Committee, chaired by retired judge, the Hon Philip Cummins AM, bringing together victims’ representatives, members of the judiciary, senior representatives of Victoria Police, the Office of Public Prosecution, the Adult Parole Board, Court Network and victim support agencies to identify ways in which the justice system can work better for victims;
• creating an additional position on the board of the Sentencing Advisory Council for a victim member;
• making it easier for victims to obtain compensation orders against offenders;
• ensuring the impact of a crime on victims can be known to the court ahead of a sentence indication;
• extending the hours of operation of the Victims of Crime Helpline to 8am to 11pm, 7 days a week;
• providing funding for an additional 6,000 victims to receive a range of support services including access to counseling;
• introducing legislation to give victims of family violence the right to tell their story publicly where a perpetrator breaches an intervention order; and
• sentencing and parole reforms that better protect victims from further offending.

The Role of Victims in the Criminal Trial Process

The Victorian Law Reform Commission is asked to review and report on the role of victims of crime in the criminal trial process.

The Commission is to report by 1 September 2016.