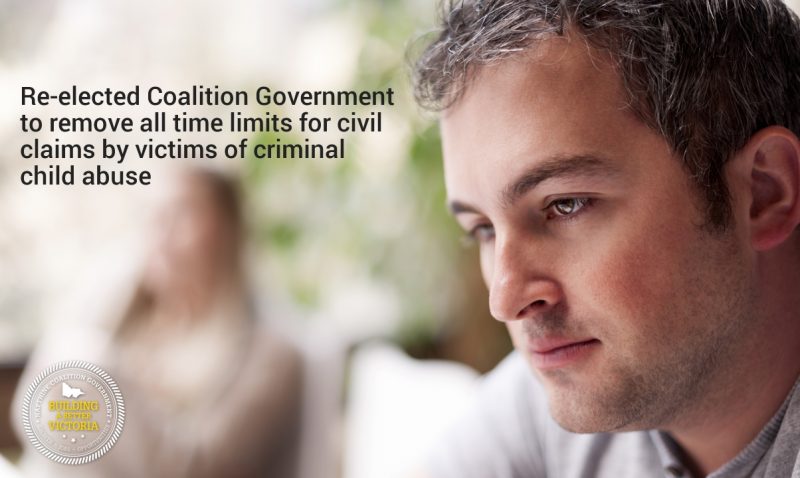 A re-elected Napthine Coalition Government will remove all limitation periods for civil claims by victims of criminal child abuse.

Attorney-General Robert Clark said the reforms would deliver on the Government’s pledge to remove inappropriate time limitations and impediments so as to allow victims of criminal child abuse to bring civil proceedings to seek compensation.

“These reforms will mean that perpetrators, and those who have allowed abuse to occur, can no longer hide behind limitation periods to escape liability for the harm they have caused,” Mr Clark said.

Mr Clark said the Family and Community Development Committee’s Betrayal of Trust report identified limitation periods as a major potential barrier to survivors of criminal child abuse obtaining compensation for the harm they have suffered. The report recommended that criminal child abuse be excluded from the operation of statutory limitation periods.

“As the Betrayal of Trust report shows, the effects of childhood sexual abuse can be lifelong and many victims are only able to come forward many years later. The law should allow for this, not penalise victims for it,” Mr Clark said.

“Arbitrary time limits cannot apply fairly in these circumstances, and this legislation will remove them.

“Under these changes, survivors of criminal child abuse will be able to commence legal action knowing that a time limitation period will not be able to be used by a defendant to knock their claim out of court.”

“Physical and sexual abuse do not always occur in isolation, and the effects of both can be devastating. These changes will allow victims to seek compensation for both,” Mr Clark said.

Limitation periods apply under the Limitation of Actions Act 1958 to set time limits within which proceedings for different civil actions must be commenced. If proceedings are brought outside a limitation period, a claimant can be barred from obtaining a remedy unless the court gives permission for the claim to be brought. Under the reforms, claims arising from criminal child abuse will be excluded from these limitation periods.

The changes will not affect the inherent powers of the courts to control or dismiss proceedings where a court determines that a fair hearing of a matter is impossible in all the circumstances of the case. However, any such decision will be a matter for the court in the exercise of the court’s discretion in the best interests of justice, and will not occur through any exercise of right by a defendant.

Mr Clark said the effects of criminal child abuse were not always confined to the primary victim, but can extend to dependants such as family members. Accordingly, the reform will also remove the ‘long stop’ limitation period where a dependant of a deceased victim of criminal child abuse wishes to bring an action for wrongful death. This “long stop” prevents a claim being brought more than 12 years after the victim’s death.

“People may not become aware for many years of the part that criminal abuse in childhood played in the suffering and death of a loved one,” Mr Clark said.

“These changes will mean that dependants will still be able to bring a legal claim even if they only find out about the abuse and its effects years after their loved one has died.”

“Being able to bring civil proceedings is a vital part of many survivors’ quest for justice, not just to obtain compensation for the harm and loss they have suffered, but also to bring about accountability for the harm that perpetrators have inflicted,” Mr Clark said.

The Government is today releasing exposure draft legislation for public consideration and submissions over coming weeks. A re-elected Coalition Government will proceed with the legislation following the State election.

The reform to limitation periods is a further step in the Napthine Government’s implementation of the Government’s response to the recommendations of the Betrayal of Trust report. Reforms previously introduced or being implemented include:

• new criminal offences for grooming, failure to protect and failure to disclose;
• legislating for a ‘course of conduct’ charge to make it easier for repeated and systematic sexual offending to be prosecuted;
• removing inappropriate time limits on the prosecution of a range of sexual offences against children committed prior to 1991;
• minimum child safe standards for organisations that have direct and regular contact with children;
• allowing the Commission for Children and Young People to scrutinise organisations’ systems for keeping children safe;
• requiring ministers of religion to hold a current Working with Children Check if they have contact with children as part of their duties;
• a new ‘reportable conduct’ scheme for organisations with a high level of responsibility for children, requiring them to centrally report all allegations of child abuse to the Commission for Children and Young People; and
• requiring all schools, both government and non-government, to implement a policy for responding to allegations of child abuse.

Work is also continuing on the implementation of the Government’s response to the remaining recommendations of the Betrayal of Trust report relating to redress for victims.

The exposure draft is available on the Department of Justice website: www.justice.vic.gov.au under “Safer Communities – Protecting Children and Families – Betrayal of Trust Implementation”. Submissions on the draft are sought by 5 December 2014.