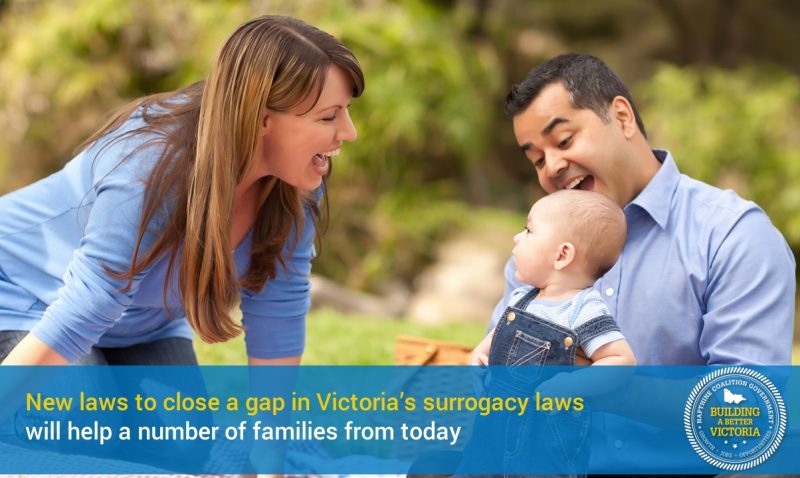 Attorney-General Robert Clark said new laws to close a gap in Victoria’s surrogacy laws would help a number of families from today.

Mr Clark said the new laws allow parents of children born in Victoria through a non-commercial surrogacy arrangement in another Australian state or the Australian Capital Territory to have their parentage legally recognised. (Treatment in the Northern Territory will not be covered by the new arrangements as it does not have laws regulating surrogacy.)

“These changes are important for families both legally and symbolically to ensure their relationship is fully recognised,” Mr Clark said.

“These amendments allow for formal recognition of a child’s commissioning parents in Victoria, while also providing safeguards to ensure Victoria’s laws on assisted reproductive treatment and surrogacy are not circumvented.”

The changes have amended the Status of Children Act 1984 and the Births, Deaths and Marriages Registration Act 1996.

The changes provide for Victoria’s Registrar of Births, Deaths and Marriages to amend the birth registration of a child conceived under an interstate surrogacy arrangement, once certain requirements are met. These include a Victorian registration order being made by the County Court or Supreme Court, and a corresponding surrogacy parentage order being obtained from the other Australian state or territory.

The new laws will apply for children who have previously been born in Victoria under an interstate surrogacy arrangement, as well as for children born in the future.