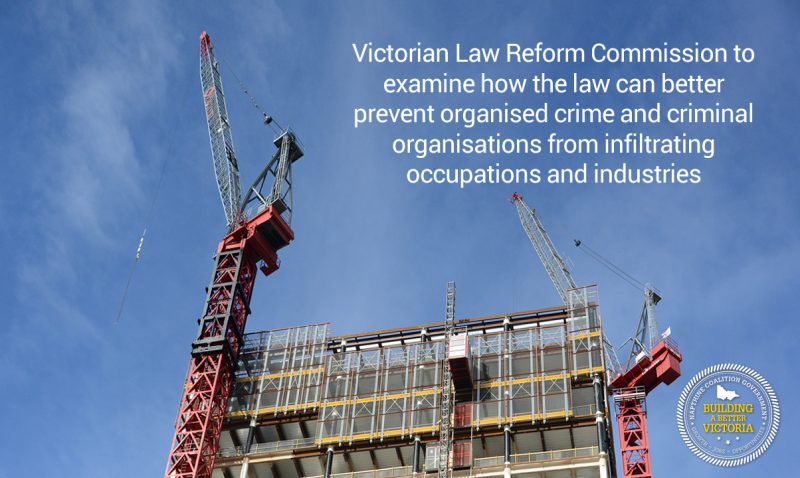 The Victorian Law Reform Commission (VLRC) has been asked to examine and report on how the law can better prevent organised crime and criminal organisations from infiltrating occupations and industries.

Attorney-General Robert Clark said it was important for the law to keep ahead of organised crime so that criminals can’t simply move on from one industry to another whenever they find new opportunities for infiltration.

“Victoria Police have repeatedly pointed to evidence of organised crime gangs infiltrating legal businesses and industries to provide cover for their criminal activities, to launder money and gain access to legitimate services that might not otherwise be available to them,” Mr Clark said.

“We’ve seen recently how organised crime can move into an industry such as debt collecting if they see the chance, and we need to make sure that we have proper protections in place where needed before organised crime tries to move into other industries or occupations.

“There is also serious concern about criminal involvement in parts of the building and construction industry, such as some labour hire firms.

“As well as making sure we have protections in place such as the Building and Construction Industry Code and the Construction Code Compliance Unit, authorities will benefit from a comprehensive and in-depth assessment by the VLRC of what factors open up a risk of criminal infiltration of various industries and occupations, and what protective mechanisms are likely to work best in any particular situation.

“We need to identify what factors have made some industries vulnerable to criminal gang and organised crime infiltration, and what measures can and should be put in place to prevent it.

“We also need to look for ways to improve the regulatory responses that can limit and exclude criminal gangs from infiltrating lawful activities, while at the same time being conscious of the regulatory burden on legitimate businesses.”

Mr Clark today released terms of reference for the VLRC to review and report on the use of regulatory regimes in preventing organised crime from entering into or operating through lawful occupations and industries.

Mr Clark said regulatory regimes available to authorities included the use of laws, regulations, policies and instruments to regulate an occupation or industry, including licensing regimes and occupational registration requirements.

The Coalition Government has already introduced a range of new measures to tackle criminal gangs and other organised crime, including:

• legislating for serious drug offenders to forfeit almost everything they own upon being convicted, regardless of whether or not it is the proceeds of crime;
• tougher sentences for large scale drug traffickers, with 14 year median jail terms for offenders under the new baseline sentencing reforms;
• legislating to allow criminal bikie and similar gangs to be outlawed and fortifications on their premises demolished; and
• unexplained wealth laws.

The Coalition Government has also announced that, if re-elected, it will legislate to tackle criminal infiltration of the debt collection industry by requiring debt collectors to be registered and meet strict eligibility and compliance requirements, and making it an offence to use an unregistered debt collector.