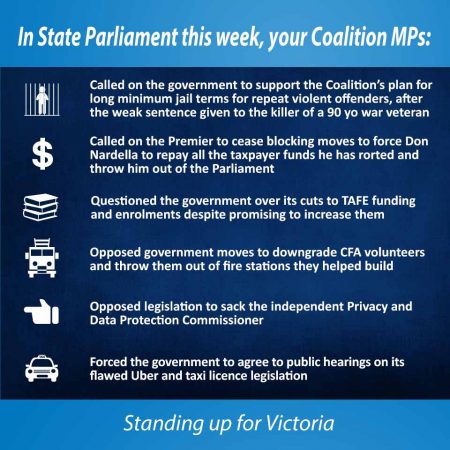 In State Parliament this week, Liberal and Nationals MPs called on the government to support the Coalition’s plan for compulsory long minimum jail terms for repeat violent offenders, following the horrific murder in his own home of 90 year old war veteran, Ken Handford, whose killer was given a minimum sentence of only 13 years.

We called on the Premier to cease his blocking of moves for the Parliament to force rorting MP, Don Nardella, to repay all of the taxpayer funds he has dishonestly pocketed and throw him out of the Parliament.

We questioned the government over its cuts to TAFE funding and enrolments, despite its pre-election promises to increase them.

We opposed government moves to downgrade CFA volunteers and throw them out of fire stations they helped to build, after the government’s secret preparations to split up the CFA became public.

We forced the government to agree to refer its flawed Uber and taxi services legislation to a Parliamentary Committee to conduct public hearings and take evidence from all affected parties.