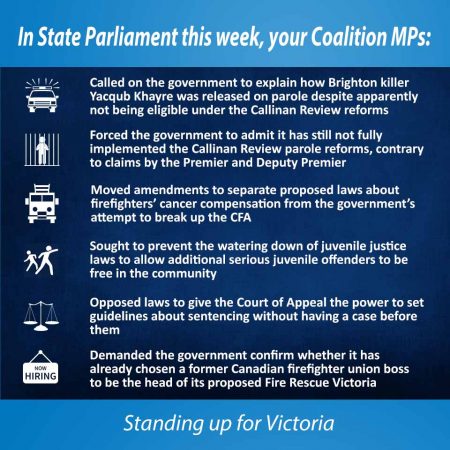 In State Parliament this week, Liberal and Nationals MPs called on the government to explain how Brighton killer Yacqub Khayre had been released on parole, despite apparently being disqualified under the Callinan reforms because he had committed a further arson offence in prison during the second half of his sentence.

We also forced the Premier to admit that the government has still not implemented all the reform recommendations of the Callinan review, despite both the Premier and Deputy Premier previously having told Parliament they had.

We demanded the government confirm whether it has already chosen a former Canadian firefighters’ union boss to be the head of its proposed Fire Rescue Victoria, which the government wants to take over the paid staff and many of the functions of the CFA.

We moved amendments to try to separate proposed laws about firefighters’ cancer compensation from the government’s proposed laws attempting to set up Fire Rescue Victoria and break up the CFA.

We sought to remove from new juvenile justice legislation provisions that will allow an even greater number of serious juvenile offenders to be free in the community rather than locked up.

We also opposed a proposed new law that would give the Court of Appeal the power to set guidelines about future sentencing even without having a case before them.