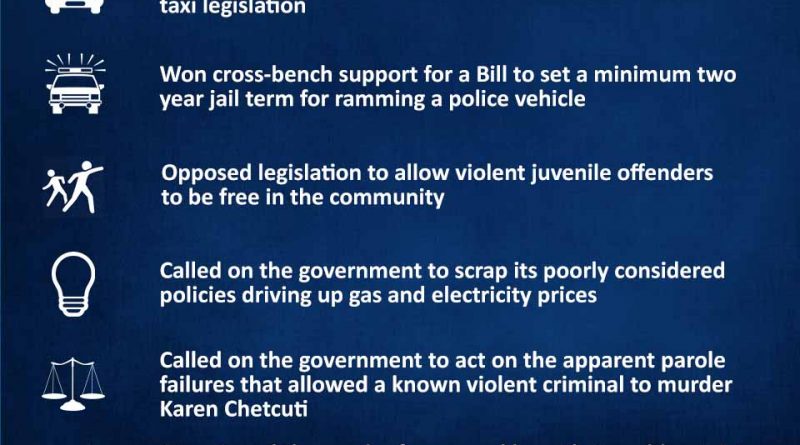 In the first sitting week of State Parliament after the winter recess, Liberal and Nationals MPs continued to oppose the government’s legislation to impose an unfair new tax on taxi, Uber and hire car trips and to cancel taxi licences with unjust and inadequate compensation.

Regrettably, the legislation was passed with the support of the Greens Party, Sex Party and Vote 1 Local Jobs Party.

However, we were successful in winning cross-bench support in the Legislative Council to pass the Coalition’s Bill to set a two year minimum jail term for ramming police vehicles. Disgracefully, the government voted down the Bill in the Legislative Assembly without even allowing it to be debated.

We opposed legislation that would allow violent juvenile offenders to be free in the community on rather than locked up, and called on the government to remove this provision from its juvenile justice Bill.

We called on the government to act on Victoria’s soaring gas and electricity prices and to reverse poorly considered policies, such as the ban on conventional on-shore gas exploration, that are driving up energy costs for families and businesses.

We highlighted a range of apparent parole system failures that had allowed a known violent offender to murder Karen Chetcuti, and called on the government to fix them.

We questioned the wide extent of proposed laws to protect the Yarra River, which appear to allow far-reaching restrictions on farms, businesses and even family homes located a long way away from the Yarra or its tributaries.

As well, we condemned the government’s move to wipe off all fines previously incurred by criminals who are sent to jail, and highlighted numerous crimes being committed by repeat violent offenders in calling on the government to support the Coalition’s move for compulsory minimum jail terms for these offenders.