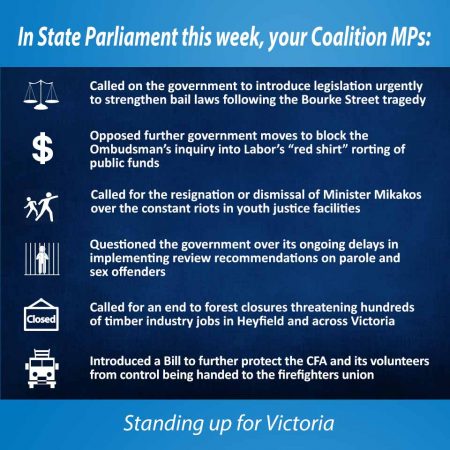 In State Parliament this week, Liberal and Nationals MPs repeated called on the government to legislate urgently to strengthen bail laws following the Bourke Street tragedy.

We also questioned why it was a higher priority for the government to move a motion trying to protect themselves from the consequences of their rorting than to introduce legislation to protect Victorians from soaring crime.

We called for the resignation of Minister Mikakos, the minister in charge of Victoria’s youth justice facilities, over the constant riots and breakouts by violent teen offenders that the Minister and the government have allowed to occur.

We questioned the government over its long delays in implementing recommendations of previous justice reviews into parole and sex offenders, and how Victorians could have any confidence on it acting on the bail review it has established.

We called on the government to end its forest closures in breach of government promises, which are threatening timber industry jobs in Heyfield and across Victoria.

We introduced legislation to further protect the CFA and its volunteers from government attempts to hand control over the CFA to the firefighters union.

We also moved to restrict government attempts to gain sweeping and unfettered planning powers over the Metro tunnel project, and called for changes to preserve as many as possible of St Kilda Road’s iconic trees.