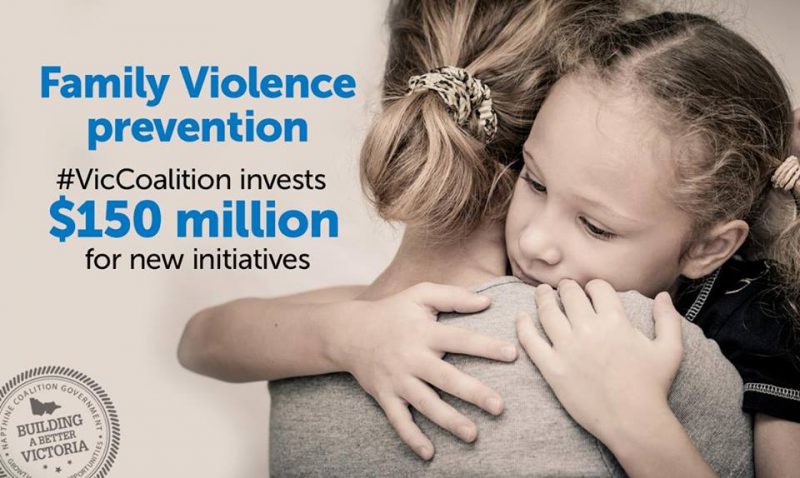 A comprehensive $150 million action package that will reduce the incidence of family violence across Victoria has been unveiled today by the Victorian Coalition Government.

Dr Napthine said the new investment doubled family violence funding since the Coalition came to office and would make a real difference in preventing violence and keeping women and children safe, in addition to holding perpetrators to account.

“Violence against women and children is unacceptable at any time, at any place and under any circumstances,” Dr Napthine said.

“Victorians, particularly women and children will be safer as a result of this comprehensive, whole-of-government strategy that tackles this insidious crime at all levels.

“These new initiatives address the causes of family violence, they educate the community, they provide support services for victims and they hold perpetrators to account,” Dr Napthine said.

Highlights of the $150 million package include:
• $41 million to deliver Victoria’s largest ever prevention campaign in partnership with Our Watch, including a social marketing and behaviour change campaign and local community action;
• Expanded crisis accommodation support for women and children;
• A new Multi-Disciplinary Centre for women and children who experience sexual assault, complete with police, sexual assault and family violence experts and child protection staff;
• Outreach teachers to work with children fleeing family violence;
• Atrial of GPS monitoring of high risk perpetrators;
• Additional legal and advocacy support for women;
• Behaviour change programs for men in prison as a result of family violence;
• Specialist staff in courts to assist victims and perpetrators of violence through the court processes; and
• Improved and expanded post-crisis support for women and children.

“In contrast, the Labor Party have offered $1.5 million in recycled announcements and an expensive Royal Commission that will cost millions of dollars and delay action for years,” Mr Ryan said.

“The Coalition is getting on with the job. We have a plan, and we are investing in what we know works based on the best advice of victims of family violence, frontline family violence workers, Victoria Police and the courts. The Government is not willing to put more families at risk by procrastinating and delaying rather than implementing a real plan to make families safer.

“Preventing family violence is part of the Coalition’s vision for a better Victoria. We want to change community attitudes, we want women and children to be safe in their homes and communities, and to get the support they need, and we want to hold perpetrators to account and stop them from re-offending,” Mr Ryan said.

Attorney-General Robert Clark said the Napthine Government would provide additional workers in Victoria’s courts to help those affected by family violence and trial GPS tracking technology to protect those at risk.

“These extra staff will provide support for victims throughout the court process and help ensure their safety, while also increasing perpetrator accountability and compliance with court orders,” Mr Clark said.

“New GPS technology has the potential to improve safety and confidence for victims of family violence while also making perpetrators realise their movements are being monitored and recorded. This new technology to protect against family violence will now be the subject of a comprehensive trial,” Mr Clark said.

Dr Napthine also announced a new Ministerial Council for the Prevention of Violence Against Women and Children, led by the Premier and Deputy Premier.

“This is Victoria’s largest single investment in family violence prevention. There will be a statewide campaign and every area across the state will be provided with funding for local action to prevent violence against women and children,” Ms Wooldridge said.

“Through this significant investment, the Napthine Government continues its commitment to preventing violence, as well as improving responses to violence against women and children when it occurs,” Ms Wooldridge said.

“In addition, we have increased penalties for breaching intervention orders, we are providing expanded services and support to victims of family violence and we are investing in prevention and behaviour change programs,” Dr Napthine said.

“With this new package, the Coalition Government has increased total spending to prevent violence and support the women and children who are victims of family violence to more than $140 million next year. This represents a doubling in funding since 2010.”