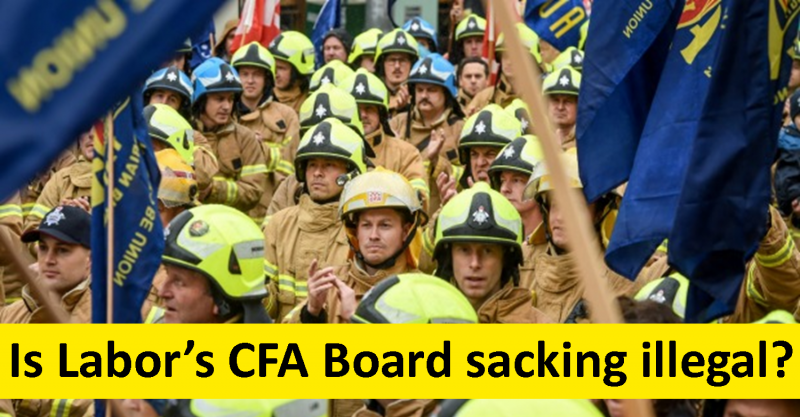 Not only has Premier Andrews acted like a thug and a bully in sacking the CFA Board, but both the Premier and the Deputy Premier, James Merlino, may have broken Federal and State laws and be in contempt of the Supreme Court.

The Fair Work Act s.343 prohibits anyone from threatening or taking action against a person to coerce them about how they exercise their workplace rights, which include the right to take part in making an EBA. Breaching that prohibition carries a penalty of up to $54,000.

Threatening to sack CFA Board members if they won’t sign an EBA sounds very much like trying to coerce them about making an EBA, given the reasons they won’t sign are because they’ve got strong legal advice saying the EBA probably contains unlawful terms AND they have a statutory duty under the CFA Act to consult with volunteers about the latest proposals, AND on top of that the Supreme Court has ordered them not to sign and to consult with volunteers.

If that isn’t enough, Victoria’s Equal Opportunity Act s.105 also makes it illegal to request, instruct or induce someone to discriminate against any of their employees, which is what the government’s own Crown Counsel says the Labor/UFU EBA is likely to do.

One of the great strengths of our legal system is that no-one should be above the law. Premier Andrews and his government need to be held to account for what they have done.

For The Age’s account of some of the legalities involved in the Board’s sacking and the powers Labor’s deal gives to the UFU, see Firefighters stoush: safeguards for volunteers largely meaningless, says top QC.