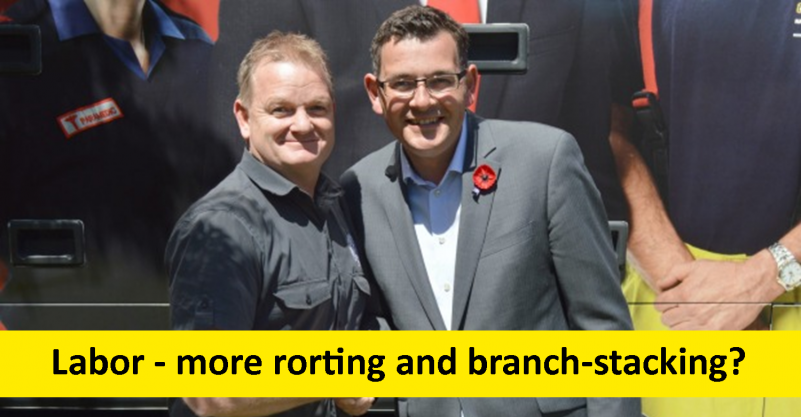 The allegations in today’s The Age of massive rorting of membership numbers by the Plumbers Union go the heart of Labor’s credibility as a political party.

Union numbers are crucial to deciding who becomes a Labor MP and who doesn’t. If those numbers are rorted, fair and honest decisions about Labor candidates go out the window.

The Labor Party – the party that claims to stand for ordinary, working Australians – has now become the party of rorters and branch stackers.

We’ve seen Cesar Melhem using his slush fund for patronage and appointments, John Sekta and his contempt for the law, anonymous gift cards being used to pay for hundreds of Labor Party memberships, and now these claims of fraudulent membership numbers within the Plumbers Union.

Daniel Andrews and Bill Shorten need to get this cleaned up. Our democracy can’t afford to have a Labor government in Victoria and a Labor opposition in Canberra whose strings are being pulled by union rorters and fraudsters.

Rank and file members of the Plumbers Union are entitled to ask what is happening to their membership fees. If in reality the union has barely 6,000 members, but is paying Labor affiliation fees for more than 11,000 members, then union members are being slugged even more in membership fees than they know about, so as to fund the factional ambitions of union officials who are supposed to be working in their interests .

This is yet another reason why the Senate needs to pass the Coalition government’s union reform legislation to raise standards and accountability for union officials.