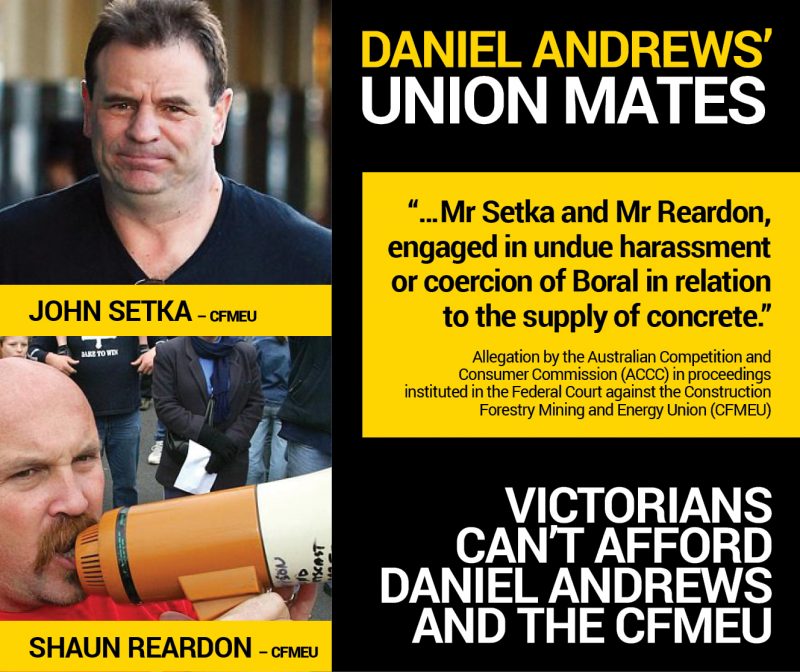 The Victorian Government welcomes today’s announcement by the ACCC that it has commenced legal action against the CFMEU and CFMEU officials John Setka and Shaun Reardon over the alleged secondary boycott of Boral.

This decision by the ACCC shows how seriously the ACCC regards the CFMEU’s conduct and the importance of ensuring that unions like the CFMEU aren’t allowed to place themselves above the law.

As the ACCC have said in their statement today:

…the ACCC will not hesitate to take action where it has evidence that unions or individuals have engaged in conduct which goes beyond what is reasonable to protect workers, and is deliberately targeted at damaging business.”

This shows once again the risk to Victoria if Daniel Andrews ever became Premier with the CFMEU pulling the strings.

It also shows the importance of the Coalition Government’s Building and Construction Industry Code of Conduct, which requires parties to notify the Construction Code Compliance Unit of any attempts by unions or others to force them to take part in a secondary boycott. Victoria cannot afford the risk of allowing Daniel Andrews to carry out his threat to scrap the building industry code and abolish the CCCU.

The Victorian Government has previously joined legal proceedings before the Supreme Court seeking to have the CFMEU found in contempt of court for their conduct towards Boral arising from the Grocon emporium blockade.

The Supreme Court has already found the CFMEU in criminal contempt for its blockade of the emporium site and imposed a record $1.25 million fine.