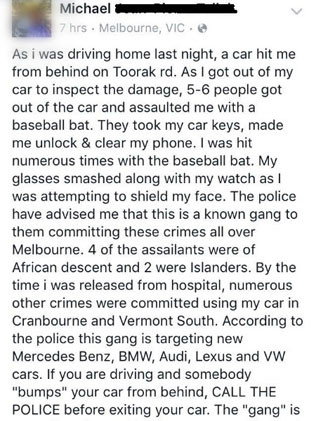 It’s appalling that someone simply driving home along a Melbourne street can have their car deliberately rammed and then be bashed and robbed.

But that’s what has happened to a Melbourne man who was simply driving along Toorak Road.

Just yesterday it was reported that suspected Apex gang members were out on bail when they broke into a house in Ormond and attacked and robbed six Chinese students.

It’s no use the Premier simply saying offenders will “feel the full force of law”, when offenders treat the law with contempt.

The government should be strengthening the law so would-be offenders, regardless of age, get the message that crime will actually have real and serious consequences.