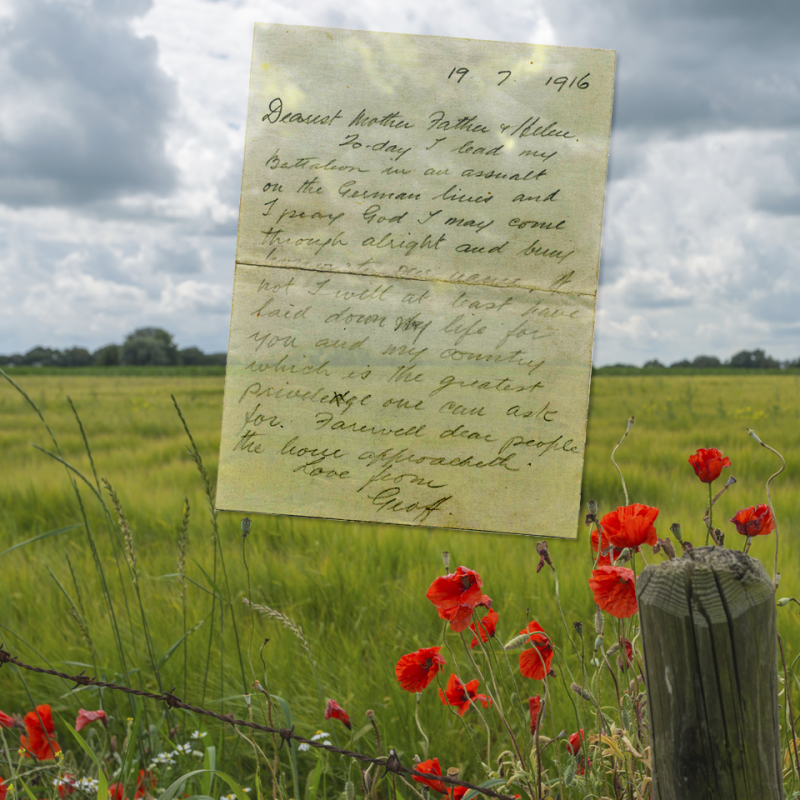 “Today I lead my battalion in an assault on the German lines and I pray God that I may come through alright and bring honour to our name. If not I will at least have laid down my life for you and my country, which is the greatest privilege one can ask for. Farewell dear people, the hour approacheth.” Major Geoffrey McCrae, 19 July 1916

A short while later, McCrae went “over the top” with his battalion and was killed, shot through the neck, early in the Battle of Fromelles. His final letter poignantly captures the tragedy of war and the sacrifice that so many have made over so many generations so that we today can live in peace and freedom.

Geoffrey Gordon (Geoff) McCrae was born in 1890 in Lower Hawthorn. He was an architect and serving as a Captain in the militia with the 58th Infantry Regiment (The Essendon Rifles) when he enlisted in the AIF in August 1914. He was twice wounded on Gallipoli while serving with the 7th Battalion. At the express wish of his former battalion commander, Brigadier General H E ‘Pompey’ Elliott, in 1916 he was transferred to the 60th Battalion, promoted to Major and appointed temporary commander of the unit. He was twenty-six years old when he was killed in action on the evening of 19 July 1916 . He was posthumously Mentioned in Despatches, and is buried at Rue-Du-Bois Military Cemetery, Fleurbaix, France.

(Image of Major Geoffrey McCrae’s final letter and the information about his life courtesy of the Australian War Memorial.)