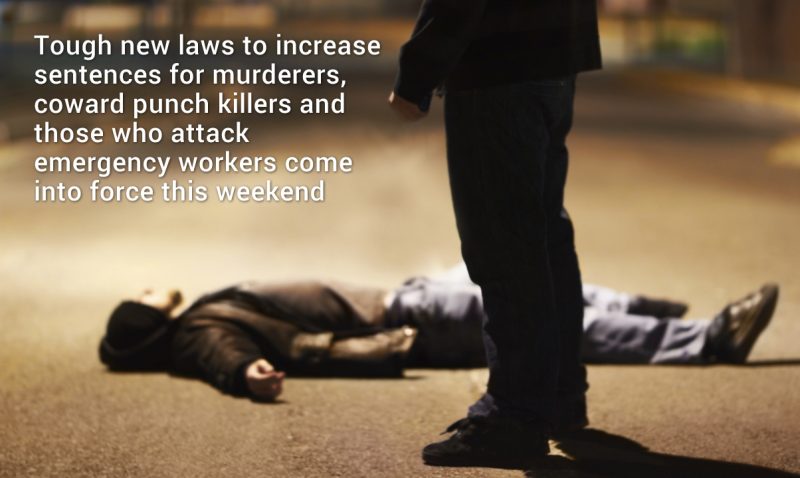 Tough new laws to increase sentences for murderers, coward punch killers and those who attack emergency workers are amongst a range of new laws that come into force this weekend.

The laws are the latest in the Napthine Coalition Government’s ongoing reforms to better protect the community and to reverse the harm done by 11 years of Labor’s soft on crime approach.

The increases are part of the Government’s baseline sentencing reforms, which will also see big increases in sentences for child sexual abuse and culpable driving causing death.

Coward punch killers will also face at least 10 years in jail for manslaughter if they punch an unsuspecting victim to the head, resulting in the victim’s death.

Those who attack a police officer or other emergency worker from this weekend will face a range of tougher penalties, including at least six months in jail for any attack causing injury.

This weekend also sees the abolition of the offence of defensive homicide, which has allowed violent killers to escape conviction for murder by arguing they were acting in self-defence, when in fact there was no reasonable justification for the attack they inflicted on their victim.

As well, Victoria’s first unexplained wealth laws come into operation, under which drug traffickers and others who seek to profit from crime can have their assets frozen and be required to show how their assets came from lawful means, or else see those assets forfeited.

Police will also be able to obtain warrants to impound assets suspected of being paid for from the proceeds of crime, and require the alleged offender to show how they came by the asset lawfully.

Attorney-General Robert Clark said the new laws commencing this weekend were the result of work the Coalition Government has been undertaking since being elected to bring about far-reaching reforms to the criminal law to better protect the community and ensure that offenders are held to account.

“At the last election, the Coalition committed to undo the soft-on-crime policies of the former Labor government, and that is what we have been doing,” Mr Clark said.

“These reforms will see violent offenders spend longer in jail and make it harder for criminals to profit from their crimes. Murderers will also no longer be able to hide behind trumped-up excuses to escape justice.

“The Coalition Government is committed to ensuring strong and effective sentences that will deter crime and protect the community. Putting violent criminals behind bars means they are not out on the street committing further crimes and ruining the lives of innocent victims.”

The reforms commencing this weekend build on the wide range of laws to better protect the community that have already been introduced by the Napthine Coalition Government. These include:
• abolishing suspended sentences
• abolishing home detention
• putting teeth back into community based sentencing, including options such as curfews, no-go zones, non-association orders, alcohol exclusion orders and up to 600 hours of community service
• four year statutory minimum non-parole periods for attacks involving gross violence
• up to five years’ jail for serious or repeated breaches of family violence orders
• two-year bans from licensed premises for offenders convicted of alcohol fuelled violence
• legislating to ensure those convicted of large-scale commercial drug trafficking will forfeit almost everything they own
• strengthening bail laws
• legislating to allow criminal bikie and similar gangs to be outlawed and fortifications on their premises demolished
• ensuring parolees who reoffend have their parole automatically cancelled or reassessed
• reforming double-jeopardy laws
• introducing Brodie’s law to make serious bullying a serious crime
• strengthening police powers to use and retain DNA evidence
• broadening move-on laws
• providing for crime victims to be consulted prior to judges giving sentence indications
• strengthening Working With Children Check legislation
• new laws against grooming of potential child sex offence victims or their parents or carers
• new laws against failing to report child sexual abuse
• simplifying and shortening jury directions, thus reducing the length and complexity of criminal trials and removing opportunities for technical appeals
• the Open Courts Act 2014 to reform suppression orders and support open justice
• the Vexatious Proceedings Act 2014 to reform the law on vexatious litigants
• simplifying the law of committals.

Summary of the New Laws

Coward’s punch manslaughter: offenders who punch or strike someone in the head resulting in the victim’s death, where the offender knows their victim is not expecting to be hit, will be guilty of manslaughter and liable to a minimum non-parole jail term of 10 years.

Confiscation of criminal wealth: allows a court to restrain all of the property of a person suspected on reasonable grounds of serious criminal activity. The onus will then be on the person concerned to have property released from the restraint by showing that it has lawful origins. Where they cannot do so, the assets will be forfeited.

As well, police can obtain a warrant to seize a particular item of property suspected on reasonable grounds of being unlawfully acquired. The onus will then be on a person claiming ownership to come forward and demonstrate the lawful origins of the property. Where they can’t do so, the property will be forfeited.