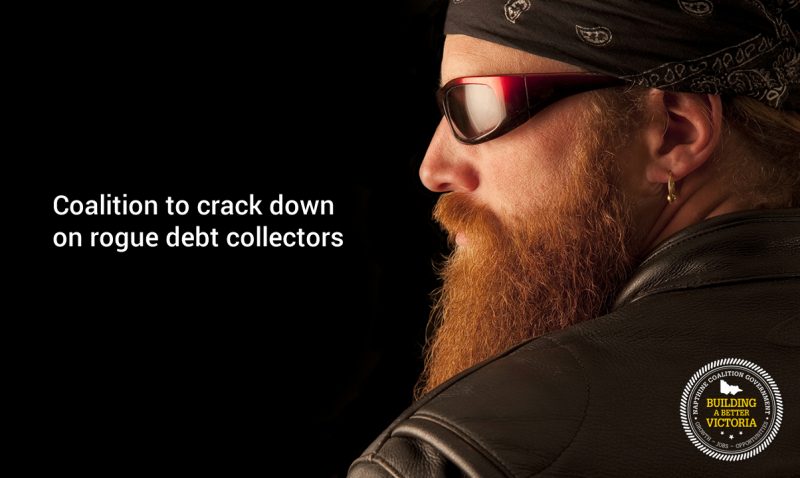 A re-elected Napthine Coalition Government will legislate to crack down on rogue debt collectors, following the failure of Labor’s 2010 changes that removed any effective oversight of the industry, Attorney-General Robert Clark announced today.

As a result of Labor’s changes, Victoria is the only state where debt collectors are not properly regulated, with growing evidence that this has allowed outlaw motorcycle gangs to pursue debts using intimidation and threats of violence, especially in the building industry.

“Victoria Police have identified the need for proper regulation of debt collectors, following the manifest failure of Labor’s disastrous decision in 2010, and a re-elected Napthine Government will act to tackle criminal infiltration of the debt collection industry,” Mr Clark said.

“Evidence given recently by Victoria Police to the Royal Commission into Trade Union Governance and Corruption has highlighted the fact that members of outlaw motorcycle gangs have become heavily involved in debt collecting in the building industry, using standover tactics to intimidate alleged debtors and bypassing lawful debt recovery processes.”

A re-elected Coalition Government will introduce legislation to:

By strengthening the regulation of debt collectors, the Coalition will ensure that anyone wanting to conduct debt collection activities in Victoria is known to authorities and meets strict requirements.

These reforms will help ensure that inappropriate people can no longer get away with acting as debt collectors, such as:

• members of outlaw motorcycle or other crime gangs;
• persons who have committed serious criminal offences such as drug offences, fraud or violent crimes; and
• persons who use physical force, undue harassment or coercion in debt collecting.

“The Coalition will give Victoria Police the powers it needs to end the involvement of organised crime in debt collection in Victoria,” Mr Clark said.

“These powers will enable Victoria Police to exclude criminals, thugs and dodgy operators from the Victorian debt collection industry. Those who breach these laws will face tougher penalties than ever before.

“Labor’s ’hands-off’ approach to debt collection regulation has been yet another spectacular failure that has cost the community dearly.

“The Coalition expressed reservations about these changes when Labor introduced them, and it is now clear that those concerns have been realised. Yet again, it is up to the Coalition to fix another Labor mess.”