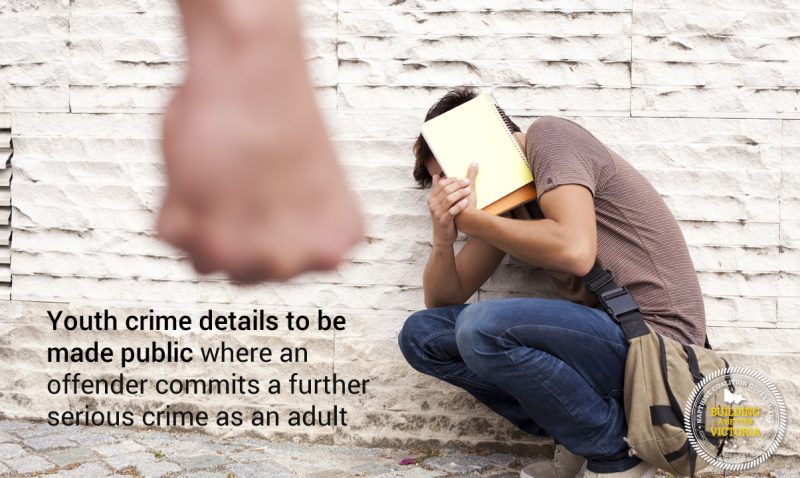 A re-elected Napthine Government will legislate to allow details of serious youth crime to be made public where an offender commits a further serious crime as an adult.

Attorney-General Robert Clark said restrictions on publication of youth offending are designed to allow a young offender the opportunity to turn away from crime without having their youth offending on the public record for the rest of their lives.

“However, if a person goes on to commit a further serious crime as an adult, they have shown they have forfeited the opportunity they were given, and the community is entitled to know the full picture about their serious criminal record,” Mr Clark said.

“Adults who commit serious crimes should no longer be entitled to have their past crimes hidden from the public.”

The Government is proposing that:

• the new law will apply where a person’s crime as a youth was a serious offence that resulted in a period in detention, and where they subsequently go on to be sent to jail for a serious offence as an adult. Serious offences include crimes such as murder and other homicides, sexual offences, armed robbery, aggravated burglary and assaults causing serious injury; and
• the reform will apply to future offences and past offences where the offender was serving a sentence for a serious offence on or after 1 January 2005. It will lift the prohibition on publication of identifying details that otherwise operates under the Children, Youth and Families Act 2005.

A re-elected Napthine Government will also streamline procedures for authorising the publication of names and photographs of youth offenders in other circumstances, such as where an offender has escaped from youth detention.

Currently applications to publish these details can only be approved by the President of the Children’s Court.

The reform will enable an application to be granted by any Children’s Court Magistrate, which will improve access and speed up the hearing of applications, particularly in urgent circumstances.

The exposure draft legislation is available on the Department of Justice website: www.justice.vic.gov.au. Submissions on the draft are sought by 5 December 2014.