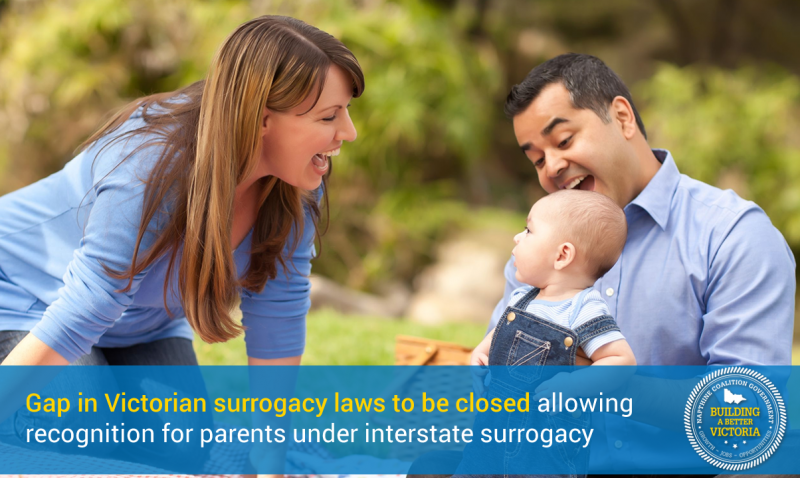 Legislation being introduced into Parliament today will close a gap in Victorian surrogacy laws to allow parents of children born in Victoria through a non-commercial surrogacy arrangement in another Australian state or territory to have their parentage legally recognised.

Currently, where a child is born in Victoria to a surrogate mother as a result of assisted reproductive treatment in another Australian state or territory, the child’s genetic or commissioning parents cannot be listed as parents on the child’s birth certificate.

Under the new legislation, where the parents obtain a parentage order from the state or territory in which the assisted reproductive treatment took place, they will then be able to seek an order from the court in Victoria recognising that they are the parents of the child for the purposes of birth registration.

The parents will then be able to present the interstate and Victorian court orders to the Victorian Registrar of Births, Deaths and Marriages to be registered as the parents on their child’s birth certificate.

In order to ensure the continued integrity of Victoria’s surrogacy laws, parents seeking a Victorian court order will need to show that they had a genuine connection to the state or territory in which the child was conceived and that they did not go to that jurisdiction in order to avoid the requirements of Victorian surrogacy laws.

“The Government is aware of at least one case where the current gap in the law has prevented the parents of a child born through interstate surrogacy arrangements from being registered on their child’s birth certificate,” Attorney-General Robert Clark said.

“Having a birth certificate that accurately reflects a child’s genetic or commissioning parents is important, legally, practically and symbolically.

“These amendments allow for formal recognition of a child’s parents in Victoria, while at the same time the court processes in the Bill will provide a safeguard to ensure Victoria’s laws on assisted reproductive treatment and surrogacy are not circumvented.”