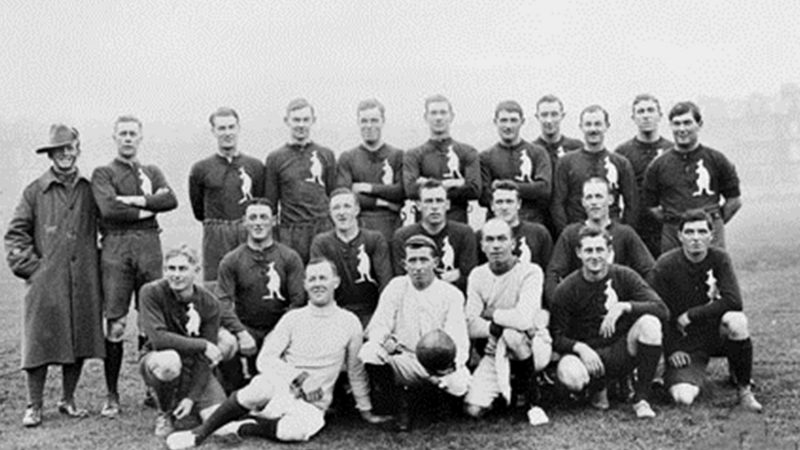 One of the earliest and most famous instances of a wartime footy game was held at the Queen’s Club in West Kensington (now best known as a tennis venue) on Saturday 28 October 1916. The Third Division, commanded by Lieutenant-General John Monash, was preparing to be deployed to France and a football match was organised (by the former Olympic champion swimmer and the later Lord Mayor of Melbourne, Lieutenant Frank Beaurepaire) against the Combined Training Groups in aid of the British and French Red Cross.

Third Division, which included many former VFL players such as Collingwood’s Dan Minogue, played in blue guernseys with a white map of Australia, while the Combined Training Groups wore red jumpers with a white kangaroo. Thousands of spectators attended, including the Prince of Wales (later King Edward VIII). The Third Australian Divisional Team beat the Australian Training Units Team 6.16 (52) to 4.12 (36).

The Times (30 October 1916) reported that: “The spectators were also treated to their first exhibition of Australian ‘barracking’. This barracking is a cheerful running commentary, absolutely without prejudice, on the players, the spectators, the referee, the line umpires, and lastly the game itself.”

During World War I, the Victorian Football League (VFL) lost 94 players fighting for their country, including 17 at Gallipoli.

For more about the Queen’s Club game, see Wikipedia’s Australian rules football during the World Wars.