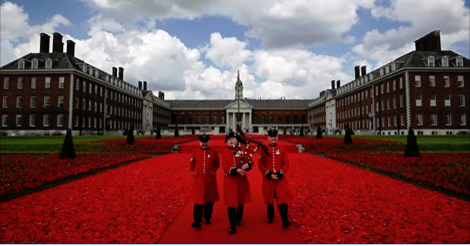 A spectacular field of 300,000 handcrafted poppies now covers the central lawn of the Royal Hospital Chelsea, thanks to the 5000 Poppies project.

The 5000 Poppies project began as a small personal tribute by two inspiring Australian women, Lynn Berry and Margaret Knight, to honour their fathers who both fought in World War II. It has become an international tribute of respect and remembrance to those who have served their country in all wars, conflicts and peacekeeping operations.

Designer Phillip Johnson, who won Best Show Garden in 2013, is the creator behind this poignant exhibit at the RHS Chelsea Flower Show.