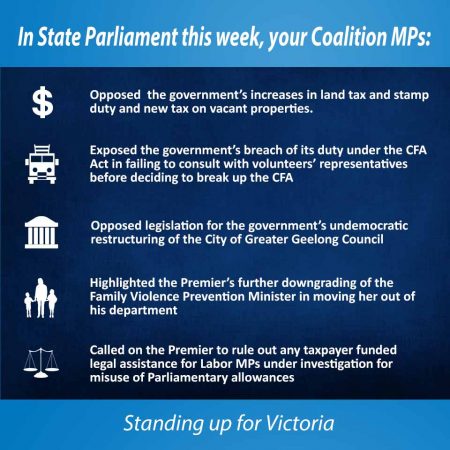 These include increasing stamp duty on new vehicles, imposing stamp duty on off-the-plan purchases of investment properties, a new tax on vacant residential properties in inner and middle suburbs, annual revaluations for land tax and removing land valuation powers from local councils. The Bill is still to be considered by the Legislative Council.

We exposed the fact that the government has breached its duty under the CFA Act in failing to consult with the volunteers’ representative body prior to deciding to break up the CFA.

We opposed legislation pushing forward with an undemocratic restructuring of the City of Greater Geelong Council, ignoring a strong community desire for a directly elected Mayor and Deputy Mayor. The Bill will now be considered by the Legislative Council.

We highlighted the Premier’s further downgrading of the Minister for the Prevention of Family Violence and her portfolio, by moving her and Family Safety Victoria out of the Department of Premier and Cabinet, despite the Minister supposedly having a responsibility to ensure action to prevent family violence across the whole of government.

We also called on the Premier to rule out any taxpayer funded legal assistance for Labor MPs being investigated for misusing Parliamentary allowances, after it was revealed the Premier’s attempts to block investigation of his “red shirts” rorting has already cost taxpayers more than $400,000.