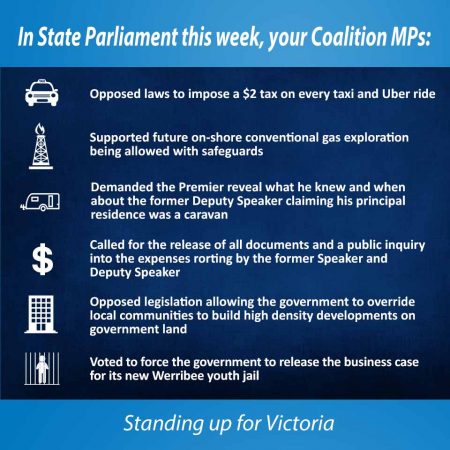 In a week with State Parliament in turmoil, Liberal and Nationals MPs opposed Labor’s move to impose a $2 tax on every taxi and Uber ride in Victoria – yet another breaking of Premier Andrews’ “no new taxes” election promise.

We supported future on-shore conventional gas exploration being allowed subject to landholders being required to consent to exploration on their land, and to any gas found being used for the domestic Victorian market.

Regrettably, Labor and the Greens combined to defeat our amendments, meaning a total ban until 2020 on conventional on-shore gas exploration in Victoria, at a time of growing gas shortages.

We demanded the Premier reveal what he knew and when about expenses rorting by the former Labor Deputy Speaker, Don Nardella, including allegations he claimed a caravan at Ocean Grove as his principal place of residence.

We also called for the release of all documents and a public inquiry into the expenses rorting by both the former Labor Speaker and Deputy Speaker.

We also voted in the Legislative Council to pass a resolution requiring the government to release the business case for its new Werribee youth jail, which it has previously refused to do.