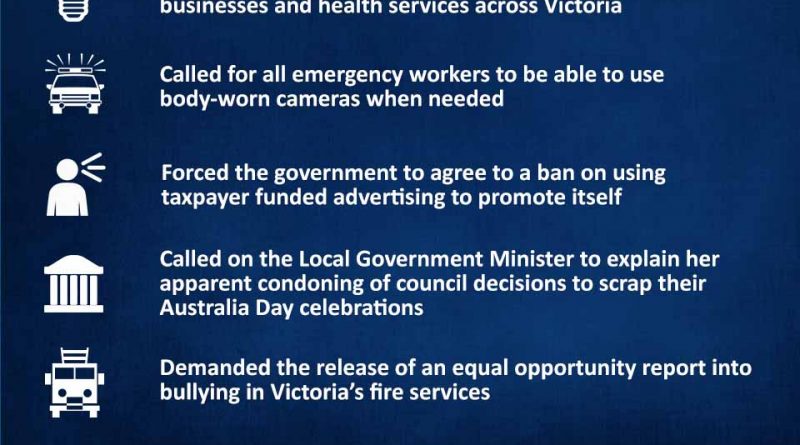 In a shortened sitting week, Liberal and Nationals MPs highlighted the damaging effects that soaring energy bills are having on businesses and health services across Victoria.

We called for all emergency workers to be able to use body-worn cameras where needed, so offenders who attack them or commit other crimes in their presence can be identified and brought to justice.

We called on the Minister for Local Government to explain her apparent condoning of council decisions to scrap their Australia Day celebrations, after the Minister told talk-back radio there should be debate about whether 26th January is appropriate.

We demanded the government release an equal opportunity commission report on bullying in Victoria’s fire services, after the government claimed so-called “executive privilege” to refuse to allow a Parliamentary committee to see the report.

We also questioned the Premier over his knowledge of trips to Syria by a Labor MP, Khalil Eideh, prior to the Premier criticising the US government for denying entry to Mr Eideh.

The week’s sitting ended sadly, following news of the passing away of Minister Fiona Richardson, with both Houses meeting only briefly on Thursday before adjourning.