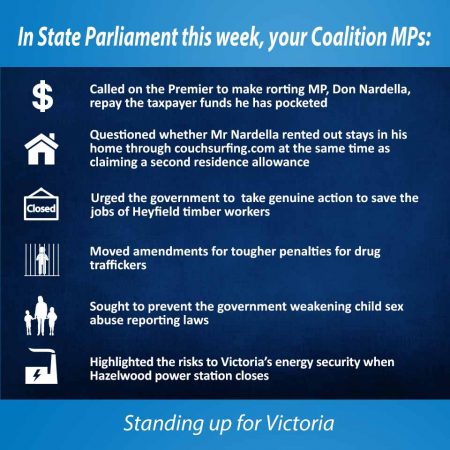 This week in State Parliament, Liberal and Nationals MPs called on the Premier to support moves in the Parliament to require Labor’s MP, Don Nardella, to repay the taxpayers’ funds he has pocketed from his rorting of his second residence allowance.

We also questioned whether Mr Nardella rented out stays in his former Ballarat home through the website couchsurfing.com at the same time as he was claiming a second residence allowance.

We urged the government to act to save the jobs of Heyfield timber workers after it reneged on a deal to provide the mill with the timber it needs to remain viable.

We moved amendments seeking to strengthen penalties imposed on large scale drug traffickers, and we opposed government moves to make it more difficult to bring prosecutions against persons who fail to report child sexual abuse.

We also highlighted the risks to Victoria’s energy security that we will soon face when the Hazelwood power station closes, given the Andrews government’s failure to act.