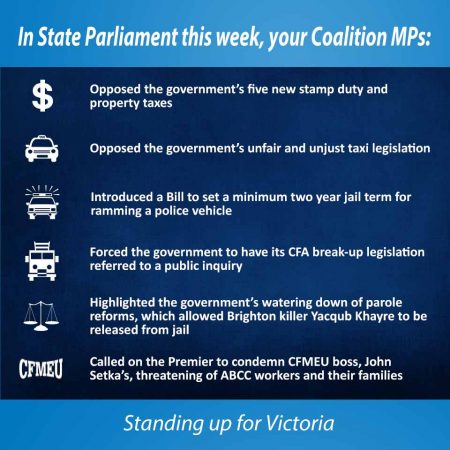 In State Parliament in the final week before the winter break, Liberal and Nationals MPs opposed the government’s five new stamp duty and property taxes.

We were successful in forcing the government to abandon its attempt to introduce more frequent revaluations for land tax and council rates, at least for the time being.

However, the Greens Party, Sex Party and Vote 1 Local Jobs Party voted to support the government to impose higher stamp duty on new cars, introduce a new tax on vacant residential properties, impose stamp duty on off-the-plan property purchases and impose stamp duty on property transfers between spouses – all in breach of the Premier’s pre-election promise of no new or increased taxes.

We opposed the government’s legislation to impose an unfair new tax on taxi, Uber and hire car trips and cancel taxi licences with unjust and inadequate compensation.

Although the government was forced to accept some amendments, the legislation was passed by the Legislative Council late last night.

However uncertainty and delay continue because the legislation will now not be considered by the Legislative Assembly until sittings resume in August.

We introduced a Bill to create a new offence of ramming a police vehicle, to carry a minimum jail term of two years to be served on top of any other sentence.

We forced the government to have its controversial legislation to break up the CFA and hand more power to the UFU referred to a Parliamentary committee to hold a public inquiry.

We highlighted the Labor government’s watering down of a key parole reform recommended by the Callinan Review, which the government claimed it had fully recommended. It has now become clear that if this recommendation had been fully implemented, Brighton Killer Yacqub Khayre would not have been released from jail.

We also called on the Premier to condemn the threatening of Australian Building and Construction Commission workers and their families by CFMEU boss, John Setka, after the Premier had previously avoided doing so when asked at a media conference.