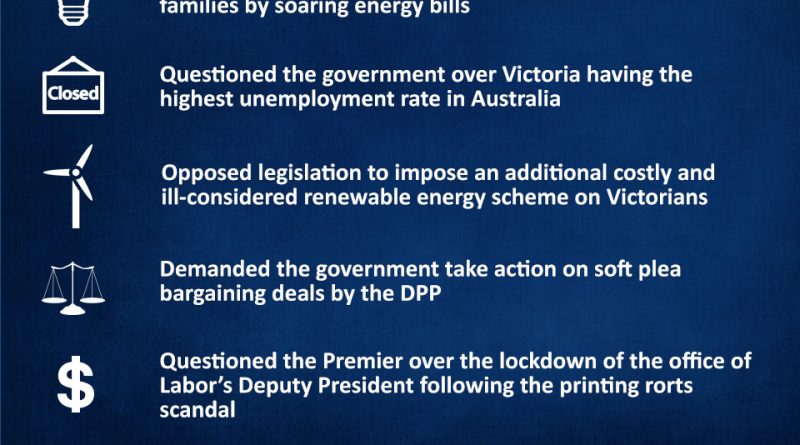 In State Parliament this week, Liberal and Nationals MPs highlighted the huge increases in energy bills that are hurting small businesses and families across Victoria, and the government’s inaction and broken promises about them.

We questioned what the government is doing about Victoria now having the highest unemployment rate of any state in Australia.

We demanded the government take action on soft plea bargaining deals being done by the DPP, after the minimum sentence of only six years given to the killer of Karen Belej following murder charges being downgraded to manslaughter.

We questioned the Premier over the fact that the office of Labor’s Deputy President of the Legislative Council has been shut, the locks changed and his staff sent on leave, following the printing rorts allegations against him under investigation by IBAC.

We opposed government moves to allow dangerous sex and violent offenders to appeal against supervision order requirements on “human rights” grounds, threatening to tie up the supervision authority in legal proceedings and hamstring its ability to protect the community.

We exposed the government’s refusal to include anti-rorting provisions in its proposed changes to election campaign laws, or to require that all ballot papers disclose whether candidates live in their electorate.

We highlighted the Premier’s use of his taxpayer funded Facebook page to promote Labor’s candidate for the Northcote by-election.

We also successfully moved in the Legislative Council to require the government to disclose a key consultant’s report on the traffic projections, impacts and costs of the West Gate tunnel project, which the government has been attempting to keep secret.