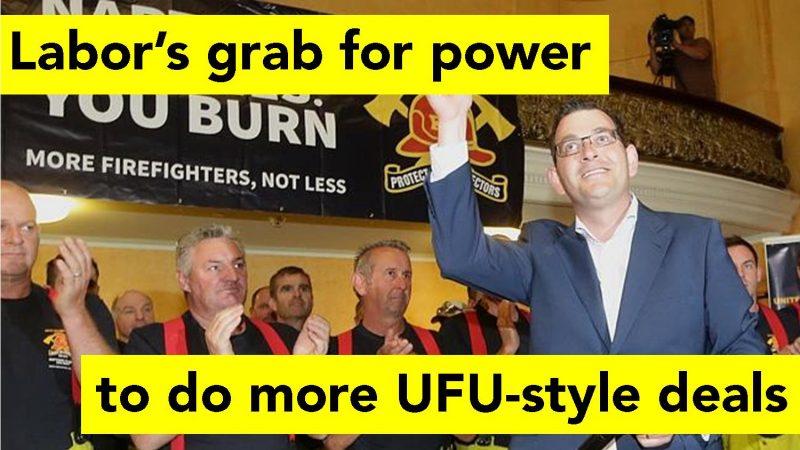 The Liberal Nationals Coalition will oppose a move by the Andrews Government to give itself the power to do more UFU-style deals with public sector unions.

The Fair Work (Commonwealth Powers) Amendment Bill is being debated in Parliament today.  It proposes to give the Andrews Government power to enter into binding EBA deals with unions across the public sector giving those union officials powers over matters such as employee numbers, promotions and staff recruitment.

This will apply not just to public sector corporations like the CFA, as happens at present, but to every part of government, including core government departments and agencies.

At present, Victorian law doesn’t allow the Commonwealth’s Fair Work Act to include provisions affecting the “number, identity and appointment” of employees in EBAs, except for some public sector corporations like the CFA.

However, if this legislation is passed, it will open the way for Premier Andrews to do deals to give to public sector union officials powers over departments and agencies similar to the powers he has already agreed to give to Peter Marshall and the UFU.

It will allow the Andrews Government to do deals with its union mates on EBA clauses that will lock in massive levels of bureaucratic employment and restrictive work practices, instead of providing better services to the public, and give union officials UFU-style control and veto powers across the entire public sector.

Giving these powers to union officials has the potential to cripple the functioning of large parts of government, just as the UFU has already sought to cripple large parts of the operations of the CFA and its volunteers.

There has already been massive growth in public sector bureaucracy under Labor, as more and more highly-paid jobs are created for Labor mates.  This legislation will simply open the way to further increases in bureaucracy at even greater cost to taxpayers.

Previous Victorian governments, both Coalition and Labor, have rightly recognised that no state should surrender its sovereignty over matters that go to the heart of its ability to function, such as the number, identity and appointment of its employees.

However, the Andrews Government is determined to ignore good sense and good government in order to deliver on what it promised to those union officials who helped get it elected.