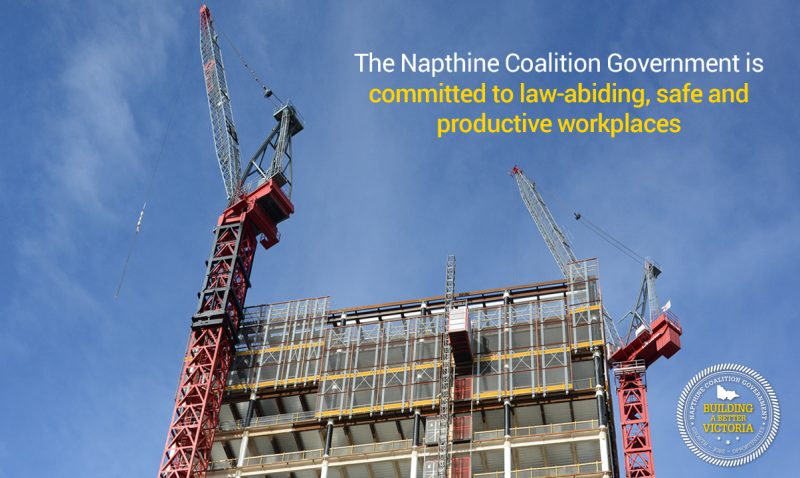 The Construction Forestry Mining and Energy Union (CFMEU) has failed in its attempt to obtain leave to appeal to the High Court from a Full Federal Court decision supporting the Victorian Government’s implementation of its building and construction industry guidelines.

”Today’s decision will allow the Victorian Government and the Construction Code Compliance Unit to continue with the work of ensuring Victorian public sector construction sites are law-abiding, safe and productive.”

The dismissal follows earlier court decisions against the CFMEU, including the substantial penalties for contempt imposed by the Supreme Court for the CFMEU’s activities against Grocon in 2013, and rejection by the Full Federal Court of the CFMEU’s attempt to disrupt the Bendigo Hospital project.

“CFMEU members are entitled to ask in whose interests their union officials are acting, given their costly, failed opposition to the Coalition Government’s reforms to provide law-abiding, safe and productive workplaces for construction industry workers,” Mr Clark said.

”We have also recently extended the guidelines to require drug and alcohol screening on all major Victorian Government construction projects, helping to achieve further safety improvements for workers on those sites.“

The Napthine Government’s commitment to law-abiding, safe and productive construction industry work sites is in stark contrast to Daniel Andrews’ and Labor’s intention to abolish the guidelines and the Construction Code Compliance Unit if they are elected to government.

“Voters will thus have a clear choice at the next election; between a Napthine Government committed to law-abiding, safe and productive workplaces, and a Labor Party willing to sell out the interests of workers and taxpayers to the dictates of the CFMEU,” Mr Clark said.