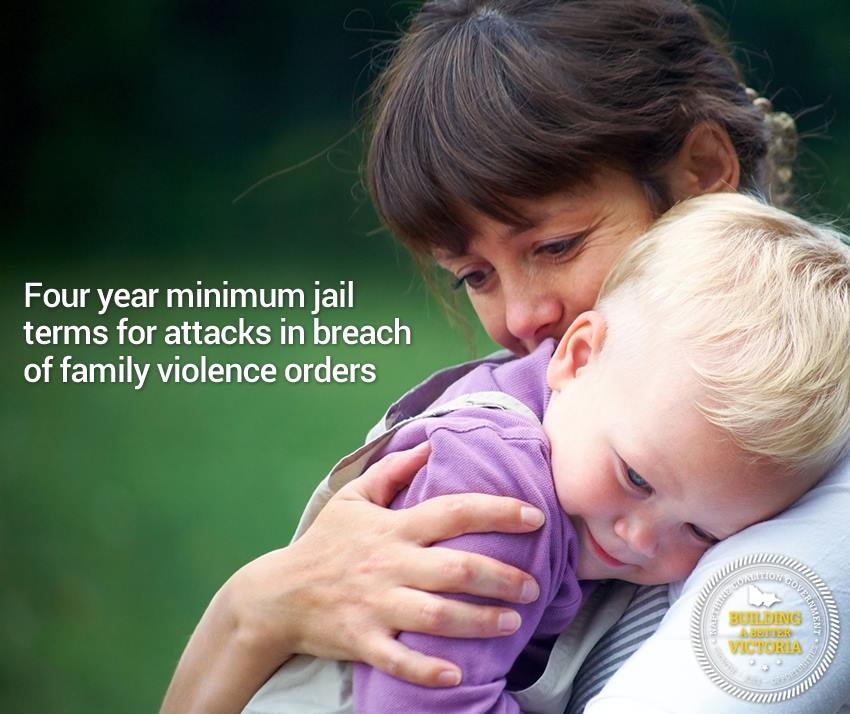 Family violence perpetrators who seriously injure their victim while breaching a family violence order will face a minimum of four years in jail under strong new laws to be introduced by a re-elected Napthine Government.

“This four year minimum jail term will reinforce the very clear message that violence against family members will not be tolerated and perpetrators who breach family violence orders can expect to go to jail for a long time,” Dr Napthine said.

Attorney-General Robert Clark said the Coalition Government has previously legislated to reverse the reduction in maximum sentences for breaches of family violence orders by the previous Labor government.

“We have reinstated sentences of up to five years in jail for repeated breaches of family violence orders and breaches intended to cause fear to victims,” Mr Clark said.

“Four year minimum terms for offenders who cause serious injuries in breach of a family violence order will further reinforce the message that violence against a family member in the home is just as much a crime as violence against a stranger on the street, and the law will treat it as such.

A re-elected Napthine Government will bring legislation into Parliament early next year to implement this reform.

Minister for Community Services Mary Wooldridge said this reform added to the wide range of other reforms and initiatives introduced by the Coalition Government to stop family violence occurring, keep women and children safe and hold perpetrators to account

“The initiatives we have taken address the causes of family violence, they educate the community, they provide support services for victims and they hold perpetrators to account.

“Unlike Daniel Andrews and Labor who would waste time and money on a Royal Commission, the Coalition knows what needs to be done and is getting on with doing it.

Ms Wooldridge highlighted previous reforms and initiative introduced by the Coalition Government, including: