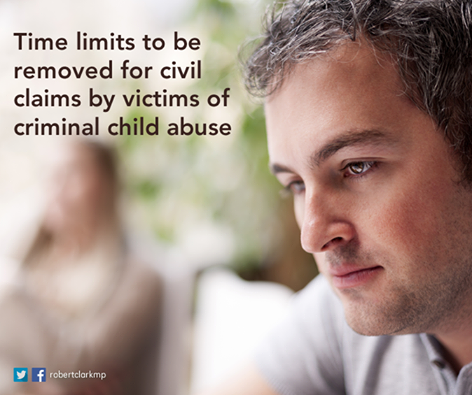 It is pleasing that the Andrews Government is proceeding with legislation drafted by the Napthine Government to remove all limitation periods for civil claims by victims of criminal child abuse, which was released for public comment in October last year.

The Family and Community Development Committee’s Betrayal of Trust report identified limitation periods as a major potential barrier to survivors of criminal child abuse obtaining compensation for the harm they have suffered…. The effects of childhood sexual abuse can be lifelong and many victims are only able to come forward many years later. The law should allow for this, not penalise victims for it. Arbitrary time limits cannot apply fairly in these circumstances. Being able to bring civil proceedings is a vital part of many survivors’ quest for justice, not just to obtain compensation for the harm and loss they have suffered, but also to bring about accountability for the harm that perpetrators have inflicted.

It is also important that the Andrews Government continue with the other work that was being undertaken by the Napthine Government, including the Government’s response to the recommendations of the Betrayal of Trust report relating to redress for victims.

For details of yesterday’s announcement by the Andrews Government, see: http://goo.gl/wbmMrN.

For details of the Napthine Government’s announcement of October last year, see: http://goo.gl/qMCzzP.