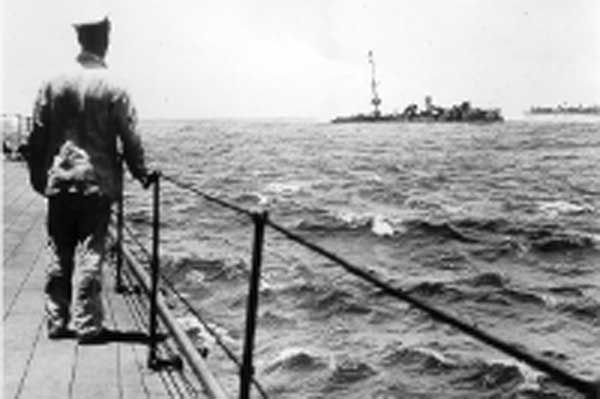 Today marks 100 years since HMAS Sydney destroyed the German light cruiser SMS Emden in a battle off the Cocos (Keeling) Islands in the Indian Ocean. The Emden’s guns had more range and fired first, but Sydney’s more powerful guns pounded the Emden until it was disabled and beached on North Keeling Island. It was a decisive victory for the Royal Australian Navy in its first-ever wartime engagement at sea and it also helped ensure the safe passage for the 1st Australian Imperial Force (AIF) convoy which had sailed from Albany, Western Australia, under escort only eight days earlier bound for the Middle East.

The Emden’s enduring legacy is the “knightly manner” in which her captain and crew fought. Only one life was lost among the 27 ships sunk or captured by the Emden. Even when his ship was being pursued by his enemy, Captain Karl von Müller would stop to rescue survivors of the ship he had sunk so they wouldn’t drown.

HMAS Sydney’s Commanding Officer, Captain John Glossop, signed the following letter which was never delivered to Captain von Müller: ‘In the event of your surrendering in which I venture to remind you is no disgrace but rather your misfortune, I will endeavour to do all I can for your sick and wounded and take them to a hospital.”

On the 11th November 1914 (two days after the Battle of the Cocos), The Times reported: “We rejoice that the cruiser Emden has been destroyed at last, but we salute Captain von Müller as a brave and chivalrous foe. We trust his life has been saved, for if he came to London he would receive a generous welcome. Our maritime race knows how to admire a daring and resourceful seaman, and there are few episodes of modern naval history more remarkable than the meteoric career of the little Emden.”

(Image: View from HMAS Sydney of the SMS Emden beached on North Keeling Island, courtesy of the Australian War Memorial)