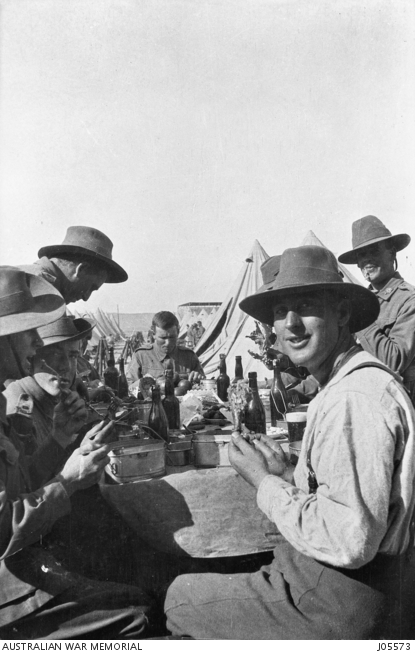 On this day 100 years ago, members of the 7th Battalion Machine Gun Section shared their Christmas dinner at Mena Camp, Egypt. The two men pictured in the foreground are Corporal Stanley John Goulding (left) and Private (Pte) Robert Allan Bunning (right) and at the head of the table is Lieutenant John Stewart Whitelaw. Cpl Goulding was a clerk and Pte Bunning an electrician, both from Moonee Ponds, Victoria, prior to enlistment.

All three members embarked from Melbourne aboa…rd HMAT Hororata for Egypt. Cpl Goulding and Pte Bunning were both wounded in action at Gallipoli on 25 April 1915. Cpl Goulding was evacuated to Alexandria, Egypt, and died of these wounds in No 15 General Hospital on 1 May 1915. He was aged 19 years. Pte Bunning was evacuated to Malta and subsequently rejoined his battalion in the Dardanelles in July 1915. He was evacuated to Alexandria in September 1915 due to illness and rejoined his battalion again after they had been withdrawn to Egypt. The battalion relocated to the Western Front, France, in March 1916. Pte Bunning was promoted to Lance Corporal on 14 July 1916 and was killed in action 11 days later near Pozieres, France. He was aged 25 years. Lt Whitelaw, of Hawthorn, Victoria, survived both World Wars and rose to the rank of Major General before retirement in August 1951. ‪#‎Anzac100‬

For additional items about how the first Christmas of WWI was celebrated, see: http://anzaccentenary.vic.gov.au/blog.