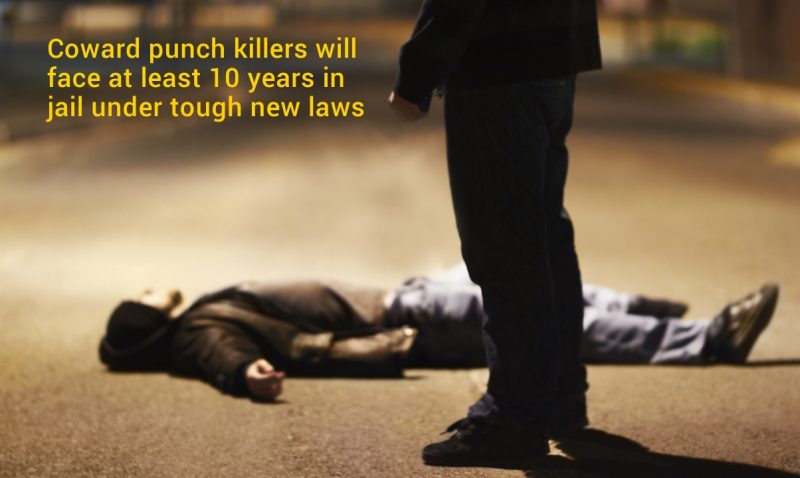 Those who inflict gross violence as part of a gang attack will also face at least 10 years in jail if the victim dies as a result of the attack.

Under the new laws, those who punch someone to the head resulting in that person’s death, where the person is not expecting to be hit, will be guilty of manslaughter and liable to a 10-year statutory minimum non-parole period.

The law will also deem any injury-causing punch to the head to be a dangerous act for the purposes of the law of manslaughter where it results in the death of the victim.

The law will apply regardless of whether the death is caused directly by a punch, or by the person hitting their head as they fall.

“A single punch to the head without warning can too often cause death or lifelong injuries. Victims are often young people who have their whole lives ahead of them,” Mr Clark said.

“This new law sends a very clear message about the tragic consequences that can flow from a moment of violence.  Claiming ignorance of the consequences of a single blow to the head will no longer be an excuse.

“The new law will drive home to would-be offenders that they will spend a long time in jail if they resort to such violence.”

Mr Clark said the new offence targeting gang violence would apply to attacks such as where victims were repeatedly kicked or stomped, resulting in their death, or where offenders deliberately carried and used knives in street fights where the victim is fatally stabbed.

“Where an offender intended to kill or to cause really serious injury, they will be guilty of murder.  But under these laws they will still face at least 10 years in jail even if the prosecution can’t prove such an intent beyond reasonable doubt,” Mr Clark said.