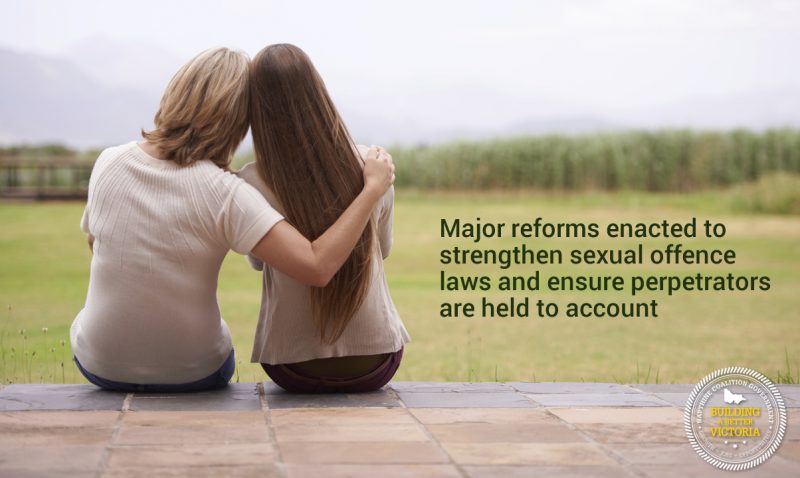 Legislation to strengthen sexual offence laws and ensure sex offenders are held to account was passed by the Victorian Parliament last night.

Attorney-General Robert Clark said the Napthine Government had introduced the legislation to strengthen sexual offence laws to simplify and clarify the definition of sexual offences such as rape, introduce a new test to determine fault and make jury directions about these offences easier to understand.

“These reforms mean offenders won’t be able to escape liability by claiming they thought the victim was consenting when there was no reasonable basis for such a belief,” Mr Clark said.

“The changes will bring greater certainty in the law and make it easier for juries to determine whether or not an accused is guilty. This will help reduce appeals and retrials that can be highly traumatic for victims and their families and cause unnecessary cost and delay.”

Mr Clark said the legislation also provided for a ‘course of conduct charge’ for repeated offending, including sexual offending.

“Under this new approach, victims will not need to provide details of specific incidents of abuse, which will make it easier for repeated and systematic sexual offending to be prosecuted.

“In cases of repeated sexual abuse over a long period of time, it is common for victims to have trouble recalling precise details of each act of abuse.”

Mr Clark said the course of conduct charge would also apply to other offences such as money laundering and obtaining financial advantage by deception, better enabling the courts to deal with these offences when committed in the context of organised crime, instead of having to bring potentially thousands of separate criminal charges.

Mr Clark said that time limits on the prosecution of certain sexual offences against children that were committed prior to 1991 have also been removed, allowing prosecution of cases where it has taken a long time for victims to report these crimes.

“We know it can take victims of child sexual abuse many years to feel able to report their abuse, so this change will help bring historical child abuse cases to justice,” Mr Clark said.

“Technology is changing rapidly and we need to make sure our laws don’t treat young people as child pornographers simply for engaging in non-exploitative peer-to-peer ‘sexting’,” Mr Clark said.