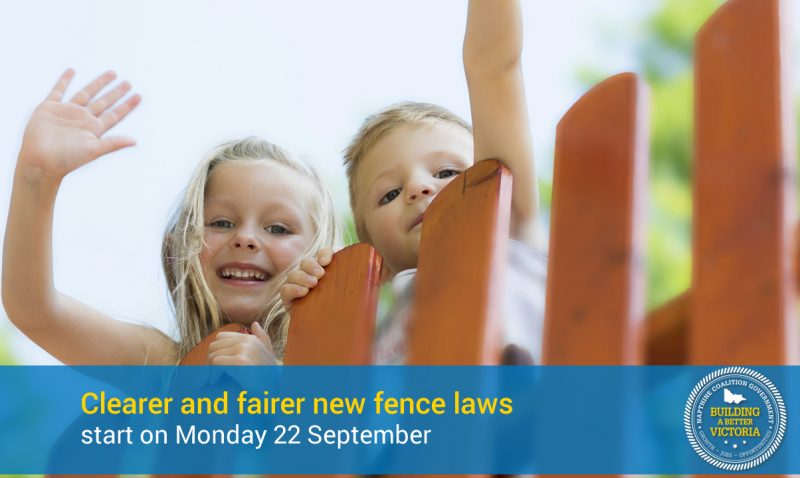 New legislation that commences on 22 September will help make the law on fences clearer, simpler and fairer and help avoid one of the most common causes of disputes between neighbours.

Attorney-General Robert Clark said the new laws would make it easier and more straightforward for people to reach agreement with their neighbour about building, rebuilding or repairing a boundary fence.

“These changes are the first in nearly 50 years and will provide clarity for property owners in what has been an often uncertain and complicated area of law,” Mr Clark said.

The commencement of the new laws coincides with the 20th anniversary of the Dispute Settlement Centre of Victoria, which helps Victorians with advice and mediation to prevent neighbourhood and community disputes from escalating.

Figures released today by the Centre show that it fielded nearly 20,000 calls for assistance in the 2013/14 year, with nearly one third (6,489) of all calls relating to fencing matters.

“Fencing disputes have typically been the number one issue for the Centre and the new laws will help reduce the number of disputes where neighbours need to seek assistance,” Mr Clark said.

The new legislation sets out clear rules and procedures on a wide range of common fencing issues, including:

Mr Clark said the centre had provided assistance for more than 225,000 callers and opened 40,000 separate cases over the 20 years it has been operating.

“The Dispute Settlement Centre of Victoria has provided valuable early assistance in a range of community disputes across the state, helping facilitate a more harmonious Victoria,” Mr Clark said.

“In the last financial year it is estimated that the centre has saved the Magistrates’ Court of Victoria more than 900 sitting days by resolving disputes early.

“Countless other people have benefited from advice and mediation which has avoided disputes from escalating further and potential hearings in court or VCAT.”

The Dispute Settlement Centre of Victoria operates from 14 locations around the state, providing free advice and mediation for people in a range of situations.

For more information on the Dispute Settlement Centre of Victoria or fences laws, please phone 1300 372 888 or visit www.disputes.vic.gov.au.