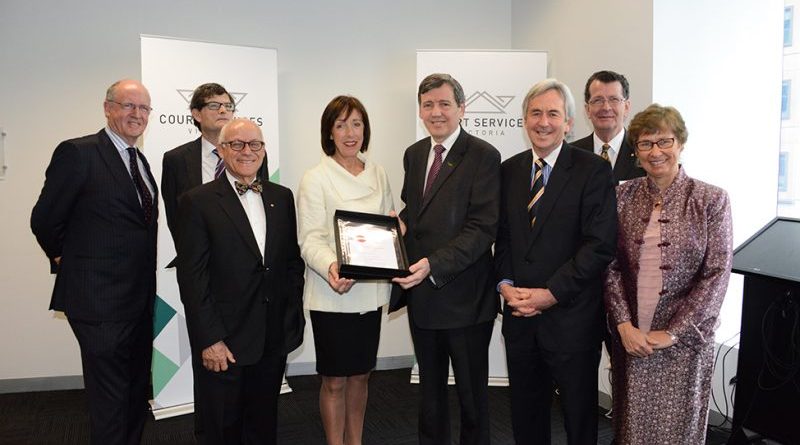 Today is an historic day. For the first time, Victoria now has an independent body, directed by the heads of each jurisdiction, free of departmental or political involvement, and accountable directly to Parliament, that will provide administrative services and support for all Victorian courts and for VCAT.

The independence of the judiciary is a fundamental tenet of the rule of law. This independence has been supported for many years by longstanding constitutional arrangements for the protection of individual judicial tenure and remuneration and for immunity from suit for the performance of duties as a judge.

However, while Victoria has a judiciary that is independent of executive government and of the Parliament, until today, the administration that supports our judiciary has not been independent of executive government direction, because it reported to and was ultimately under the control of the Secretary of the Department of Justice and hence the Attorney-General of the day.

This has derived from longstanding practice. Since courts are an arm of government under the Crown, the Crown needs to provide the administrative resources for courts to undertake their functions.

Thus, section 28 of the UK Act of 1850 that first provided for the establishment of the Supreme Court of the Colony of Victoria, An Act for the better Government of Her Majesty’s Australian Colonies, expressly stipulated that:
…such Court …shall have such ministerial and other Officers as shall be necessary for the Administration of Justice in the said Court, and for the Execution of the Judgments, Decrees, Orders and Process thereof.

However, whatever the origins of the arrangements that have applied to date, and while the administrative staff who have supported the courts have done so with great professionalism and integrity, it is preferable both in principle and in practice for the Crown’s support for the administration of the courts to be provided, not via a government department, but under the direction of the heads of jurisdiction themselves.

It is for reasons such as these that, for many decades, members of the judiciary, court administrators, academic experts and others have been calling for reforms to provide administrative independence for Victoria’s courts. Today those reforms have been delivered.

The Government came to office committed to establishing a new courts administrative body independent of executive government, and upon taking office we set about working to achieve that outcome. It was agreed to form a steering committee involving the heads of all jurisdictions together with representatives of the Department of Justice, the Department of Treasury and Finance, and the Department of Premier and Cabinet.

In July 2012, the Secretary of the Department of Justice established the Courts and Tribunals Service as a separate administrative division within the department. This has provided an invaluable transitional phase that has enabled much of detailed work and reorganisation required for the new structure to be carried out and completed in advance of today’s commencement.

The CTS has had an advisory council comprising the heads of jurisdiction and chaired by the Chief Justice, which has as closely as possible been undertaking, nominally on an advisory basis, the role that is from today being undertaken with plenary authority.

CSV will be court-focused and will provide greatly enhanced opportunities to develop efficient, innovative, whole-of-system approaches to court administration.

The governing body of CSV is the Courts Council, chaired by the Chief Justice and comprising the heads of each jurisdiction and up to two co-opted non-judicial members. The Courts Council will direct the strategy and governance of CSV based on first-hand knowledge and experience.

Each court remains as a separate entity and its governing council, internal arrangements and rule-making responsibilities remain unchanged.

The allocation of public resources to each court will continue to be determined through usual budgetary processes accountable to the Parliament, and Court Services Victoria will provide administrative staff and facilities to each court in accordance with that court’s budget.

The CSV will be directly accountable to the Parliament for its stewardship of the public resources entrusted to it and for the effective use of those resources.

With the commencement of CSV today, Victoria’s court system embarks on one of the most far-reaching reforms in its more than 160-year history, with freedom to get things done and freedom to innovate, to the benefit of court users and the broader Victorian community.

In closing, I would like to congratulate everyone who has contributed so magnificently to the joint project we began to undertake some 3 ½ years ago. CSV has become a reality today thanks to the dedication, effort and commitment of all concerned.

I congratulate the Chief Justice for her outstanding leadership and guidance.

I congratulate all the other heads of jurisdiction, who have each taken on key roles and responsibilities with great enthusiasm.

I congratulate the court CEOs and court staff for the ideas they have contributed and for all the work they have done to give effect to the myriad arrangements and adjustments involved.

I congratulate all who took part in the deliberations of the project steering committee that laid the foundations on which CSV has been built, under the steady chairmanship and guidance of Hon. Michael Black.

I congratulate the Secretaries, Deputy Secretaries and other officers of the Department of Justice, Department of Premier & Cabinet and Department of Treasury & Finance who have worked through the many implications of this major change to the institutional and financial structure of the State.

Last, but certainly not least, I congratulate Alan Clayton, the CEO of CSV and the leader of the CSV transition project, and all his team at CTS. Alan’s enthusiasm, enormous hard work, attention to detail, affability, drive and energy – along with Mick Carroll and the other members of their team – have drawn all the strands together and got us here today in good order and set to go.

I am honoured to have been asked to officially launch Court Services Victoria today. I do so with great pleasure, and I wish all who serve in and with Court Services Victoria in the years to come every success in the vital task of supporting our courts and judiciary in upholding the rule of law that underpins the free, open and democratic community in which we are fortunate to live.