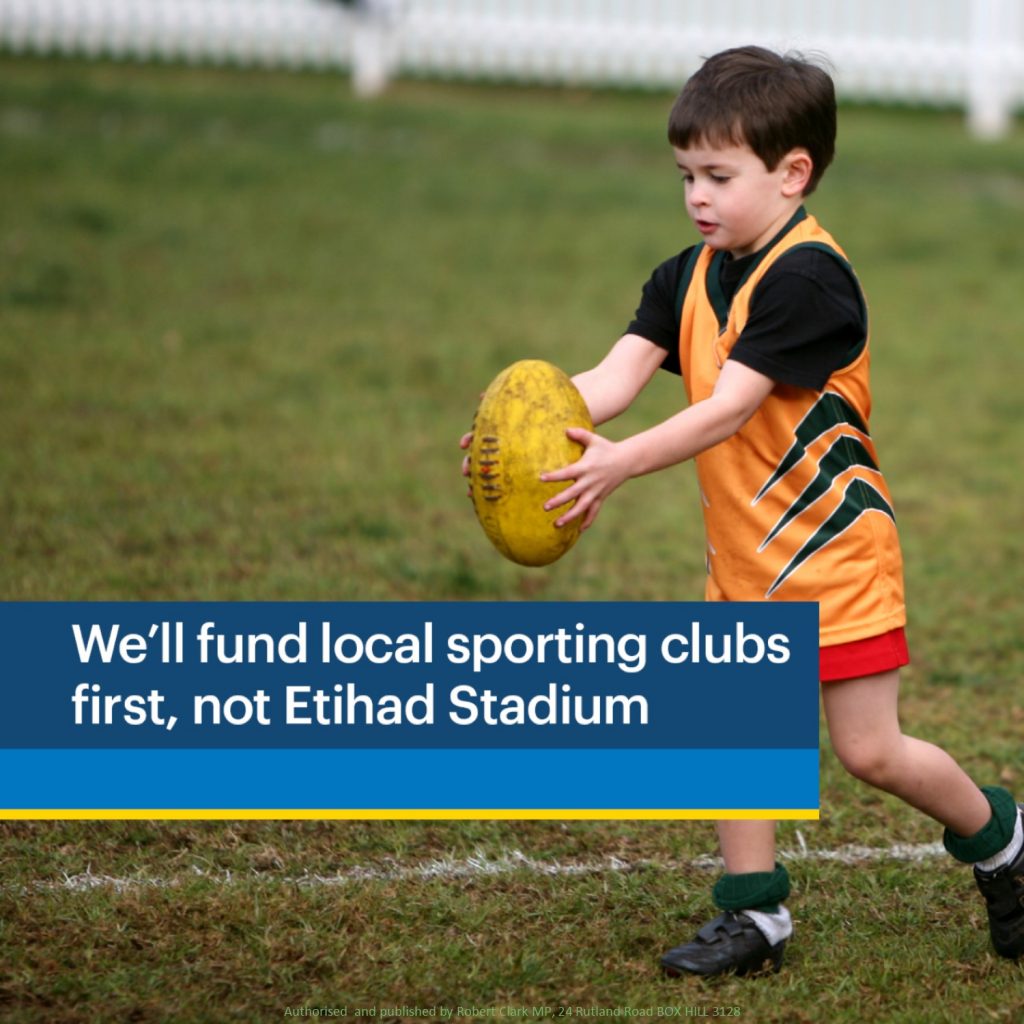 The Liberal Nationals have committed $195 million for grassroots sport to help local sports clubs get the facilities they need, as well as upgrading school sports grounds for shared use with community sports clubs.

Supporting grassroots sport with initiatives like this should be a higher priority for governments than giving $225m to the AFL for an upgrade of Etihad Stadium, as the Andrews government is doing.

Daniel Andrews has lost control of population growth and it’s hurting local community sport which is struggling under the weight of growth.

Victoria’s population is growing at around 150,000 people a year, but over 15 years of Labor Governments there hasn’t been the matching investment in local community sports.

As a result, suburban and country sport clubs facilities are rundown and stretched.

Clubs and grounds are bursting at the seams as new senior and junior players, particularly women and girls, take up sport, growth areas don’t have enough facilities and established parts of Melbourne have run out of land to cater for demand.

While grassroots sports struggle with these challenges, Daniel Andrews and Labor gave the AFL, the richest sporting organisation in the country, $225 million of taxpayers’ money to upgrade Eithad Stadium.

That’s why an elected Liberal Nationals Government will spend $195 million on upgrading local sporting facilities, including funds to support the growth in women’s and junior sport.

The $195 million Grassroots Sport Revival Fund will deliver the funding for local sport that our clubs and volunteers need to get back in control of their stretched resources.

The centrepiece of this record investment in suburban and country sports is the Grassroots Sport Fund of $89 million to fix and upgrade local sports facilities.

The Liberals and Nationals will get back in control of population growth by investing $30 million into sports facilities in growth areas through a new Sports Infrastructure for Growing Communities Fund.

And we’ll tackle the shortage of playing facilities around the state by opening up schools and other state government owned land for community sport use through a $39 million Sports Ground Investment Package.  This package will foster upgrades of school and other state-owned grounds and facilities through joint venture arrangements with community sports clubs to ensure Victorians get the best use of our recreational land especially in areas where there’s been high growth.

In 2010, there were 58 women’s and girl’s AFL teams in Victoria – today there are more than 1000.  We’ll cater for that growth, and in other sports, through a $20 million Women in Sport Facilities Fund to ensure women and girls have the facilities they need to get involved.

The Liberals and Nationals will continue the investment in country football and netball, with a $15 million injection to the Country Football, Netball and Cricket Fund. Including cricket in the fund makes sense given these three sports usually share facilities.

An elected Liberal Nationals Government will also make sure the shooting sports are catered for with $2 million over two years for the Shooting Sports Facilities Fund, which Daniel Andrews and Labor MPs cut in the 2018/19 budget.

“Suburban and regional sport clubs are being squeezed by enormous population growth.

Only a Liberal Nationals Government will provide our community sports clubs with the backing they need to get back in control and build the facilities they need to support local population growth.

It’s about time that our suburban and country sporting clubs rather than just the AFL got some support from the state government.

If it’s a choice between handing over millions of taxpayers’ dollars to the AFL or spending that money on suburban and country sports clubs, I will choose community sports every single time.”

“With more and more Victorians wasting time stuck in traffic congestion or on our failing public transport, it’s never been harder to get exercise and keep fit.

But instead of supporting local community sport clubs to provide better facilities to help people get exercise, Daniel Andrews wrote the AFL a cheque for almost a quarter of a billion dollars.

A Liberal Nationals Government will open new facilities to meet the needs of our growing population and deliver an innovative program to activate more sports facilities on school grounds for community use and support more female involvement in sport.

Victorians will have a clear choice at this election.  They can choose Labor, who throw buckets of money at rich elite sports like the AFL, or they can choose the Liberal Nationals who will help suburban and regional sport clubs get back in control of the huge demand on their facilities.”