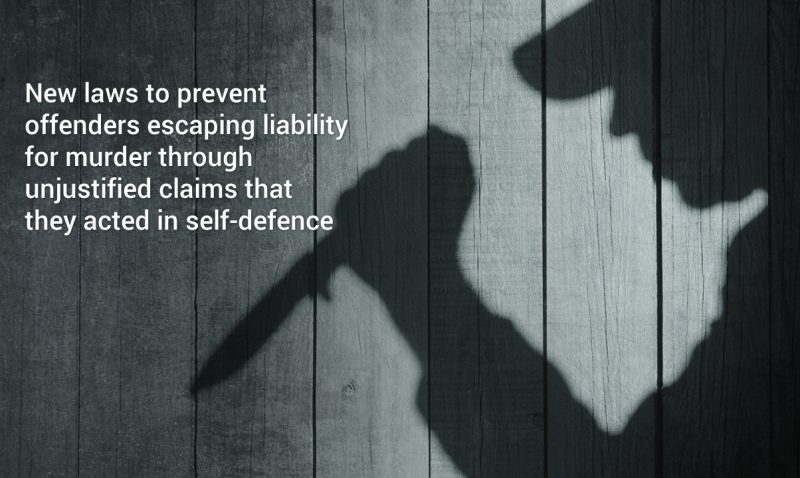 The Coalition Government will this week introduce legislation into Parliament to prevent offenders escaping liability for murder through unjustified claims that they acted in self-defence.

The legislation will abolish the offence of ‘defensive homicide’, which has allowed killers to avoid a conviction for murder by arguing they were acting in self-defence, when in fact there was no reasonable justification for the attack they inflicted on their victim.

The legislation will also introduce a clearer, simpler test for self-defence, so that self-defence will apply where a person genuinely believed their conduct was necessary in self-defence and where what they did was a reasonable response in the circumstances as they saw them.

These changes to the law will mean that if a person acts in genuine and reasonable self-defence, they will be acquitted of any offence, but if their actions were not reasonable, they will be convicted of murder.

“The law on defensive homicide has failed to work as intended and instead it is wide open to offenders using it to escape full responsibility where they deserve to be convicted of murder,” Attorney-General Robert Clark said.

“The law has proven difficult and confusing to apply in practice, leading to results that often seem unjust and contrary to common sense, where offenders who have inflicted horrific attacks on victims have nonetheless argued they acted in self-defence.

“Under defensive homicide, where an accused claims they acted in self-defence, the prosecution is required to disprove that claim beyond reasonable doubt, which has often been impossible, enabling the accused to escape a conviction for murder.

“Under the reforms we are introducing, where the prosecution can show that what the accused did was not a reasonable response in the circumstances the accused perceived, the accused will be convicted of murder.

“However, if what the accused did was a genuine and reasonable response in the circumstances as he or she perceived them, the accused will be acquitted.

“These reforms will make the law clearer, fairer and more straightforward, better protecting those who act genuinely and reasonably, while preventing those who deserve to be convicted from getting away with murder.”

Mr Clark said the legislation would also contain important reforms to jury directions, so that jurors would better understand the significance and consequences of family violence when assessing self-defence in a family violence context.

“Under the reforms, where defence counsel so requests, the judge will explain to the jury at the beginning of a trial a range of important factors about family violence, including that family violence is not limited to physical abuse and may involve psychological abuse, intimidation or threats, that different people may react differently to family violence, and it is not uncommon for victims of family violence to stay with an abusive partner rather than leave,” Mr Clark said.

“These directions will help juries to better assess self-defence in a family violence context, so that where the actions of a family violence victim are genuine and reasonable in the circumstances as the victim sees them, they will be acquitted altogether, rather than run the risk of being convicted of defensive homicide, as is the case under the law as it stands.”

The law of defensive homicide was introduced in 2005 and was intended to provide for a lesser conviction than murder where a person genuinely believed they were acting in self-defence, even though their actions were excessive and unreasonable. It carries a maximum penalty of 20 years jail, compared with a maximum of life imprisonment for murder.

It was expected that the law would mainly apply where women killed in response to family violence. However, in practice the law has predominantly been used by men who have killed in violent confrontations, often inflicting horrific injuries on either male or female victims.

The legislation follows a Department of Justice consultation paper published in October last year that proposed the abolition of defensive homicide.