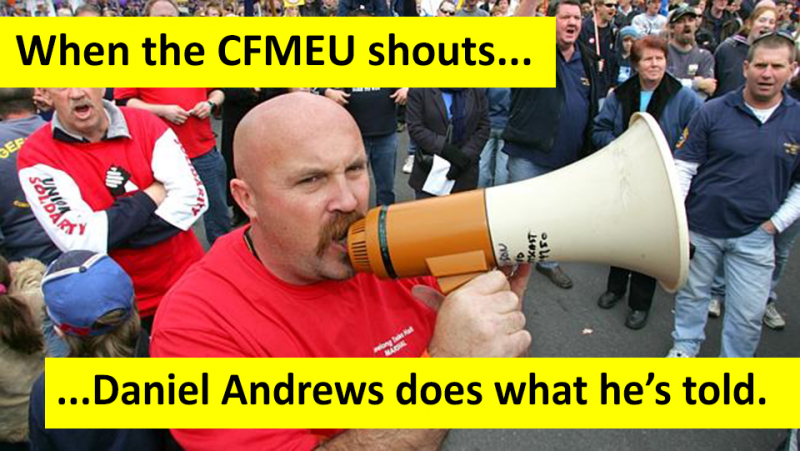 In January this year, Daniel Andrews abolished drug and alcohol testing on Victorian government building sites after the ‪#‎CFMEU‬ had called it an “attack on workers”.

Today, the CFMEU announced they’ve changed their policy and now want mandatory drug and alcohol testing after all. Straight away, Mr Andrews has come out and said he would welcome the introduction of such testing!

The Coalition introduced drug and alcohol testing on government building sites from 1 July last year after widespread reports of drug distribution and abuse, and studies pointing to the safety risk for workers.

The CFMEU’s change of heart therefore seems like good news (although we still need to see the detail). However, it shows how harmful it was for Mr Andrews to scrap testing that was already in operation and helping to protect workers.

It also shows yet again that when the CFMEU gives orders, Victoria’s Premier does what he’s told.

For today’s announcement by the CFMEU, see http://www.cfmeu.asn.au/news/cfmeu-proposal-for-new-impairment-policy-includes-drug-and-alcohol-testing

For more about the Coalition’s testing that Mr Andrews scrapped, see http://archive.premier.vic.gov.au/2014/media-centre/media-releases/10263-drug-and-alcohol-screening-to-be-enforced-on-construction-sites.html