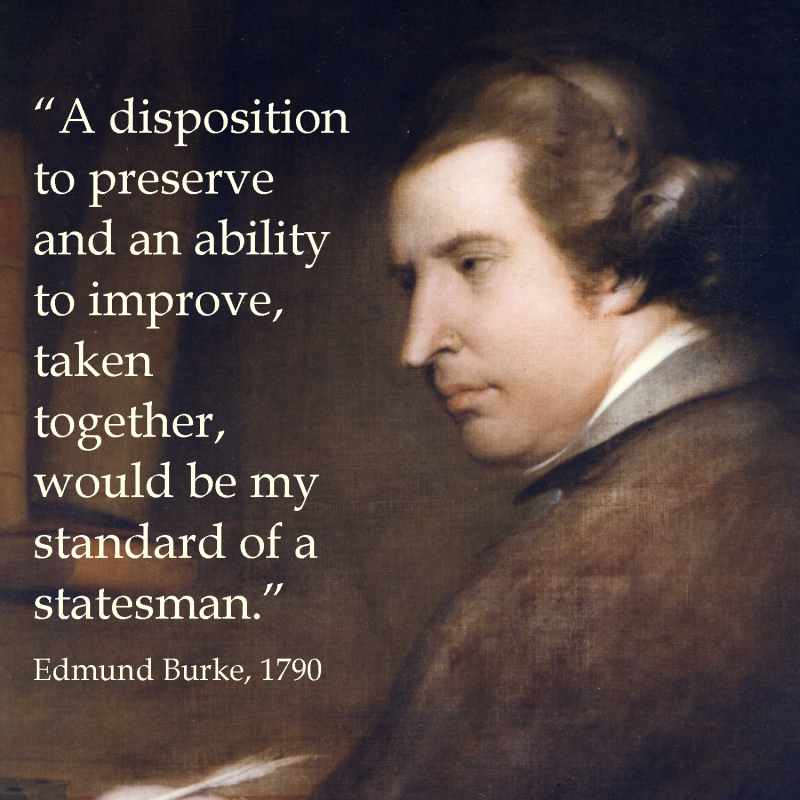 My holiday reading has included catching up with Jesse Norman’s 2013 biography of the 18th century MP, writer and philosopher, Edmund Burke.

Burke has been called the founder of “modern conservatism”.  He was also an independent and original thinker who loathed oppression and injustice wherever it occurred.

Burke fought against repressive English laws in Ireland, supported the cause of Britain’s American colonists and denounced the exploitation and corruption of the East India Company.

Burke is perhaps most famous for predicting and warning of the terrors that would flow from the French Revolution, at a time when many starry-eyed “liberals” in England were welcoming and supporting it.

One of Burke’s key insights is recognising the crucial role of established institutions, both public and private, in regulating individuals’ behaviour and thus in protecting rights and freedoms.  Measured reform, building and improving on those institutions, is good.  But violent, sudden or artificially grafted change will not only fail to achieve improvement; it will destabilise good order and government and thus weaken or lose existing rights and freedoms.

Institutions protect individuals and guard against tyranny through providing checks and balances, through giving meaning and order to lives, and through building, storing and sharing knowledge about how to behave in and contribute to running a complex society and system of government

However, institutions can only work where people are committed to them and live by them, and are able to rely on others to do the same.

People’s commitment to a set of institutions does not come mainly from the logic of those institutions, but from the facts that they exist, that their rules are known and that people are accustomed to living by them.  The commitment is reinforced if people know and cherish the history of their institutions.

Any change to established institutions and rules comes at a cost in bringing about understanding of and commitment to the change by those affected.  Any change also has a risk of either total failure or else of being exploited and causing harm until people have adjusted to the change.

Thus the gain from any change to institutions, laws and other rules must be worth its inevitable pain.

Furthermore, our society and its institutions, however imperfect, have achieved a lot, so we have a lot to lose if change goes wrong.

The risk of failure is particularly high in the case of radical change to institutions based on abstract reasoning alone.  Theories based on the reasoning of a single individual or small group of individuals are highly likely to be flawed or unworkable.  As well, even if the end result could work well if it were fully implemented, the attempt to implement it may cause such disruption and destabilisation that the attempt collapses before it is achieved, or else is distorted or hijacked, leaving people worse off than before.

The changes most likely to result in a net benefit are those that appreciate the good of established institutions, accurately identify the flaws or opportunities for improvement, are carefully targeted to those flaws or opportunities, fit well with the ethos and history of the institution concerned, are deliberated and refined widely before being finalised, and are well explained to and understood by those affected prior to their commencement.

In short, we must beware of the dangers of ill-considered changes to institutions and traditions, and instead ensure careful reform that appreciates the good in what we already have.

As Burke expressed it in his usual forthright style:

This British Constitution has not been struck out at an heat by a set of presumptuous men, like the Assembly of pettifoggers run mad in Paris … It is the result of the thoughts of many minds in many ages. It is no simple, no superficial thing, nor to be estimated by superficial understandings.

An ignorant man, who is not fool enough to meddle with his clock, is, however, sufficiently confident to think he can safely take to pieces and put together, at his pleasure, a moral machine of another guise, importance and complexity… Men little think how immorally they act in rashly meddling with what they do not understand. Their delusive good intention is no sort of excuse for their presumption.

A man full of warm, speculative benevolence may wish his society otherwise constituted than he finds it, but a good patriot and a true politician always considers how he shall make the most of the existing materials of his country. A disposition to preserve and an ability to improve, taken together, would be my standard of a statesman. Everything else is vulgar in the conception, perilous in the execution.

(Reflections on the Revolution in France, 1790)

That’s advice that should be heeded by those present-day zealots who, rather than valuing all that is good in our traditions, institutions and way of life, instead want to tear them down and rebuild society in accordance with their own narrow and presumptuous views.